How to Prep for Oil Spills: Dump 210,000 Gallons of Popcorn in the Water 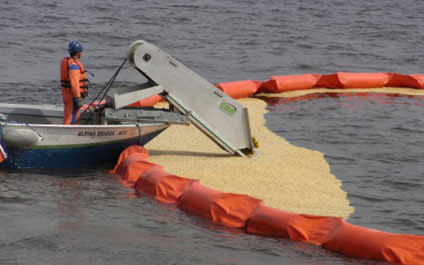 One large bucket of popcorn, please, hold the salt, oil, and butter. Actually, make that 210,000 gallons of popcorn. We have an oil spill to re-enact. Brazilian oil spill clean-up experts leapt into action last week to clean up a popcorn spill that makes movie theater accidents seem pretty tame. It turns out that popcorn makes a good approximation for spilled oil, explains the EFE, a Spanish news agency:

Although it sounds quaint, popcorn has been used to replace oil in simulations for over ten years by [Petrobras]. After testing seeds and grains, the experts found several positive factors in the popcorn: it is biodegradable--prepared without salt and no cooking oil--gives good flotation and serves as food for fish.

The popcorn spill was set up in the Rio Negro outside of Manaus, Brazil by the oil company Petrobras and the Brazilian navy. The organizations were keen to test their readiness to respond to spills because oil companies drill in the nearby Amazon, and transport their oil through the river's delta. Petrobras' spokesperson explained to EFE

"Major emergencies do not happen often, then it is a fantastic opportunity to exercise the team and technology," said regional manager of Petrobras' contingency, Márcio Derton, who completed stating that "contingency is the keyword of the moment."

The flood of popcorn was supposed to simulate a mid-sized tanker running around in the river and spilling several thousand gallons of oil over several days. National and international crews were called in to contain the spill, explains Treehugger

Fortunately, it didn't take long before an oil company's emergency clean-up crew was mobilized to tackle the floating patches of popped kernels with around 30 boats, 6,500 feet of containment boom, and five skimmers as airplanes coordinated the effort overhead.

The simulation was part of the International Mobilization, Preparedness & Response Exercise meeting

, and was the first to simulate oil clean-up in flowing river water, instead of at sea. Related Content: Discoblog: Heart-Stopping Cinematic Excitement: Guess How Much Fat Is in Movie Popcorn?

Discoblog: The Sweet Sound of Seepage: Listening to the Oil Spill