How the Malheur Occupation Hamstrung Science 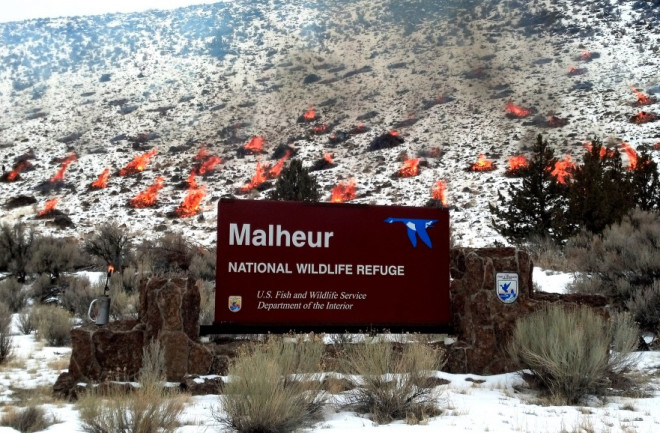 In this January 2013 photo, piles of wood from a thinning project designed to reduce wildfire risk to an adjacent town burn on a hillside at Malheur National Wildlife Refuge. Similar projects are in limbo while armed militants continue to occupy the site. (Credit: USFWS - Pacific Region/Flickr)

Last month, a flock of trumpeter swans alighted on the wetlands of the Malheur National Wildlife Refuge in Oregon, repeating an annual ritual that dates back centuries. But for the first time in 80 years, biologists were not there to count them.

The annual winter bird count, which dates back to 1935, provides key data on multiple species for a national migratory bird monitoring program. Biologists and volunteers count ibis, sandhill cranes, horned larks and other birds that stop at the refuge – an oasis in the high desert of the Great Basin.

But this year, the only people inside the refuge at the start of bird-counting season were a small group of armed militants. Instead of counting birds, refuge scientists are counting days. Monday marks the 38th day of the occupation, orchestrated by ranchers and others angered by a five-year prison sentence handed to local cattlemen Steven and Dwight Hammond for arson – and, more broadly, federal oversight of cattle grazing on public lands. Last week, 11 of the occupiers were arrested while traveling to a meeting, including the movement's ringleader, Ammon Bundy. Another man, Arizona rancher Robert “LaVoy” Finicum, was killed by local law enforcement. But four holdouts remain at the refuge, and the site remains closed.

The takeover has quashed or delayed several important research and ecological restoration projects. In addition to the bird count, refuge staff say they've also had to scrap a 4,000-acre controlled burn planned for January and February to help maintain marsh habitat and a multi-year project to control non-native carp that have decimated the refuge’s ponds and lakes. A grazing monitoring program, designed to figure out the best way to balance grazing with resource protection, is also on hold.Every day that passes pushes these and other projects farther behind, refuge scientists say. And in some cases, years of progress may be undone.

Like most national wildlife refuges, Malheur was established to protect key habitat and wildlife populations. Brought under the wing of federal protection by Theodore Roosevelt in 1908, the refuge today supports 320 species of birds, along with mule deer, pronghorn and other wildlife. Carla Burnside, an archaeologist with the refuge, notes that Malheur Lake and the refuge’s ponds are remnants of a large pluvial lake system that formed when rainwater filled the Harney Basin during wetter times thousands of years ago. Much of the archeological research at the refuge explores how ancient cultures used those lakes. The oldest known cultural site on the refuge is 9,800 years old, but archaeologists are digging even further into the past, Burnside says, piecing together the site’s history during the transition into the Holocene about 11,000 years ago.

Oregon public radio journalists who visited the refuge reported that occupiers used government equipment to clear a segment of road across a site that may contain cultural resources, but refuge officials said they couldn’t confirm those reports.

“We do anticipate that there are effects to the area, but because we haven’t been able to get boots on the ground, we don’t know where damage has occurred and what’s been impacted,” says Miel Corbett, a spokeswoman for the refuge. “All the information we have received has been from third-party accounts.”

One of the buildings occupied by the militants holds thousands of tribal artifacts culled from refuge lands, relics of ancestors of the Burns Paiute tribe. A week before he died during an altercation with local law enforcement officials, Finicum said in a video that the artifacts were not adequately stored, but tribal members questioned that claim and criticized the group’s takeover the refuge, according to Indian Country Today and other media outlets.

The Clock is Ticking

As refuge scientists wait out the occupation, the window of opportunity continues to narrow for many key habitat projects, refuge staffers say. Jess Wenick, an ecologist with the refuge, says the prescribed burn in the marsh needs to be done before the ibis arrive and begin colonizing the site next month. “We certainly don’t want to carry a fire across an ibis colony,” he says.

Ibis comb the marsh for food during their spring migration to the Malheur National Wildlife Refuge in Oregon. (Credit: Dan Dzurisin/Flickr) The occupation also disrupted maintenance of a complex dike system that’s crucial for directing water to ponds and wetlands. “The beavers will actually dig holes in the dike, and if that activity goes on long enough then those holes will be weak points where the water can punch through,” Wenick explains. Ponds and marshes will be deprived of the water they need, and the water could flood roads edging the refuge, potentially hemming in area residents, he adds.The carp control project is also hamstrung by the lack of access. The invasive fish stir up sediment on the bottom of the lake, muddying the water, which in turn chokes aquatic vegetation that ducks, geese and shorebirds feed upon. Bird populations have dropped about 90 percent, and carp are largely to blame, refuge scientists say. Conservationists, refuge biologists and Pacific Foods, a local business, came up with an ambitious plan to remove the carp, truck them to nearby Burns, and process them into fertilizer. Now, that enterprise is on the shelf. Fisheries biologist Linda Beck was unavailable for comment, but Burnside summed up the consequences to Beck’s project this way: “She’s spent a lot of time getting the carp population down, and if we cannot get in to manipulate the dam, when the snowmelt comes down from Steens Mountain [in the spring], it could set us back at least three years.”

The occupation is affecting conservation on the refuge in less obvious ways as well. The refuge is managed under a collaborative plan that conservation groups, refuge scientists, ranchers, academics and others spent years building, and tensions sparked by the occupation could put that goodwill — and the management projects it enables — in jeopardy.“I think that everyone understands that this is a very collaborative model, where we do true collaborative science, which is kind of rare,” says Wenick. “These efforts could be compromised if we’re not able to gain access to the refuge soon.”

One at-risk collaborative project involves collecting data on grazed and ungrazed areas. Comparing those data will help managers figure out the best way to balance grazing with resource protection. “This is important to everyone from the conservation community to local ranchers,” says Wenick. “If we miss a year, we miss a critical piece of the puzzle to understand the impact our management is having. Conservation groups and ranchers have called wondering if this is going forward and wanting to know what they can do.”

The data is collected over the summer, but the preparation, including hiring contract botanists, happens at this time of year, he adds. As long as the occupation continues, the project remains in limbo.

Even after the standoff ends, refuge scientists may have to wait a while longer to get back to work. A spokesman from the Harney County Joint Information Center, which is fielding inquiries from the media and the public about the standoff, says the investigation of the site could go on for some time, and it’s unclear when the refuge could reopen to staff and the public.

“Depending on what we find there and how much evidence, it could take a few days or a few weeks,” says the spokesman, who did not give his name. Right now, he adds, “our main concern is getting the negotiations going forward and resolving this issue peacefully.”

When the occupation is over, both the land and local residents will face a long process of recovery, says Tim Greseth of the Oregon Wildlife Heritage Foundation, which partnered with the refuge on the carp control project.

“There’s going to be a lot of fracturing of the community now,” he says. “It will take some time to heal the community’s suspicions and frustrations and get back to a place where there’s a level of trust for everyone to be able to work together.”