How Scientists Detect Nuclear Explosions Around the World 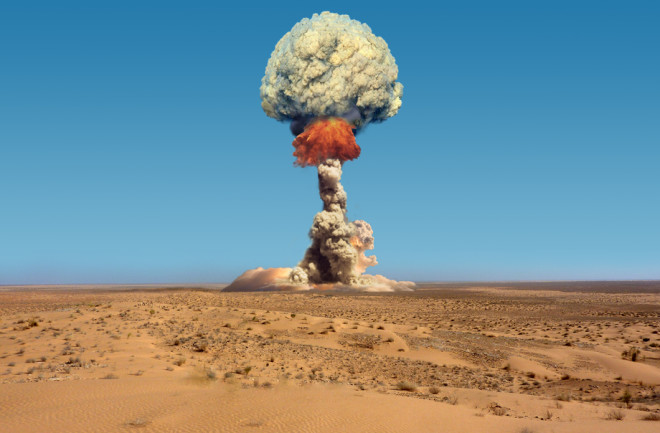 The world was literally shaken before news broke that North Korea detonated what leaders in the Hermit Kingdom claimed was a hydrogen bomb Tuesday morning local time. Officials and experts around the world quickly cast doubt on that claim, as the amount of energy produced by the explosion was likely too small to be that of a hydrogen bomb. Instead, early evidence suggests North Korea may have instead detonated a boosted-fission bomb, which produces a smaller explosive yield.

It will likely take several more days to determine what kind of nuclear device Pyongyang actually detonated. Seismological evidence was key to alerting world leaders to North Korea’s deed. But how did scientists know this event was a bomb rather than an earthquake, volcano, or game-winning touchdown run by Seattle Seahawks running back Marshawn Lynch? To answer this, we’ll have to ride the waves.

Between 1994 and 1996, international leaders negotiated a comprehensive nuclear test ban called the Comprehensive Nuclear-Test-Ban Treaty, which now includes 183 member states around the world. As part of the treaty, a global system is still being built to detect signs of nuclear explosions.

Currently, there are 282 monitoring stations installed in strategic locations around the world, with plans in place to reach 337. The IMS detection array includes different stations designed to detect seismic activity, sound waves in the ocean and low frequency waves that would be generated by an explosion. Eighty stations also sniff the air for signs of radioactive particles or noble gases. It was seismic activity that initially gave North Korea’s test away, and alerted the world to its actions.

At 10 a.m. Tuesday local time, a station in Mudanjiang, China recorded a magnitude 5.1 earthquake about 13 miles northeast of Sungjibaegam, North Korea. Experts knew what had happened after a close examination of the seismic waves that were generated.

Seismic waves fall into two primary categories: surface waves that, as their name implies, travel across the surface of the earth, and body waves that move through the earth and bounce off of structures in the ground. Body waves are further divided into primary (P) waves or secondary (S) waves. P waves are similar to sound waves traveling through the air. S waves are shear, and similar to those that form when you shake one end of a rope.

“Any source can generate a collection of seismic waves, the ratio of how strong each of those waves is is very indicative of what kind of source we are working with,” says Jean Paul Ampuero, an assistant professor of seismology at the California Institute of Technology. His expertise is in earthquake physics, and his current research centers on the devastating Nepal quake that occurred last year.

One way for seismologists to differentiate an explosion from an earthquake is to look at the ratio of P waves to S waves. Earthquakes generate weak P waves and strong S waves. Explosions, on the other hand, generate strong P waves and weak S waves. In other words, powerful explosions have higher P:S ratios than earthquakes.

“An earthquake is a shift of the ground on a fault. Put your two hands together and slide them past each other. That’s shear motion, and that generates shear waves, or S waves,” Ampuero says. Andy Frassetto, from the Incorporated Research Institutions for Seismology (IRIS) assembled seismometer readings that illustrates the P:S ratio.

The graph on the top is a seismic readout of Tuesday’s magnitude 5.1 blast in North Korea. The graph below is a reading taken from a magnitude 5.0 earthquake from 2005. The same seismometer measured both events.

Seismic recordings of vertical ground motion at IRIS-USGS (IU) station MDJ of the 2013 and 2016 seismic events. Data have been instrument response corrected to velocity and are unfiltered. (Credit: Andy Frassetto, IRIS)

In the top figure, you can see powerful P waves in the first minute after the explosion. The blast didn't radiate shear waves initially. The 2005 earthquake reading, in contrast, wasn't front-loaded with P waves, and the up-down ground motion is less intense at the start. The two waves are almost the yin and yang to each other. Beyond the P:S ratio, seismologists can also look at how deep in the earth the waves were detected — earthquakes will be detected miles deep.

Ampuero adds that the duration of the wave and its frequency is also a giveaway. But perhaps the most telling piece of evidence from Tuesday’s explosion (red) was that the seismic reading produced from the blast was nearly identical to one generated from a 2013 nuclear test that also occurred in North Korea (yellow).

Another scientist, Zhigang Peng of Georgia Tech, converted the seismic waves from past nuclear tests in North Korea into sound waves. The actual waves produced were far too low to be heard with the human ear, but Peng multiplied the frequency to make it audible. Again, similarities between the 2013 and 2016 blasts are evident.

Information about seismic waves is incredibly useful for studying all sorts of hard-to-witness events on the planet. Scientists are poring over seismograms to study the way water moves through melting glaciers and the ways these icy bodies evolve. They’re also using seismograms to examine landslides and understand the dynamics that cause them.

Myriad events on this planet generate telltale seismic waves, and these distinctive waves can be fed into computer models to identify specific events or even simulate them. Advances in computing are allowing seismologists to crunch more data at a faster rate, which helps them build even more accurate simulations. Still, seismic evidence represents just one facet of the global investigation into North Korea’s most recent behavior.

“I do not believe it is possible to distinguish small nuclear or thermonuclear (hydrogen) explosion(s) using seismic methods. An explosion can be distinguished from natural earthquakes, however,” wrote John Nabelek, a professor of geology and geophysics with Oregon State University, in an email to Discover.

On Wednesday, the United States Air Force was preparing to deploy aircraft that would test for radiation near North Korea to determine what was detonated. Radionuclide stations near the explosion, too, may hold evidence that could paint a clearer picture of what happened. Regardless, the world is prepared to levy consequences for what appears to be yet another blatant provocation.