How Scientists Are Saving The Dodo’s Pink Cousin 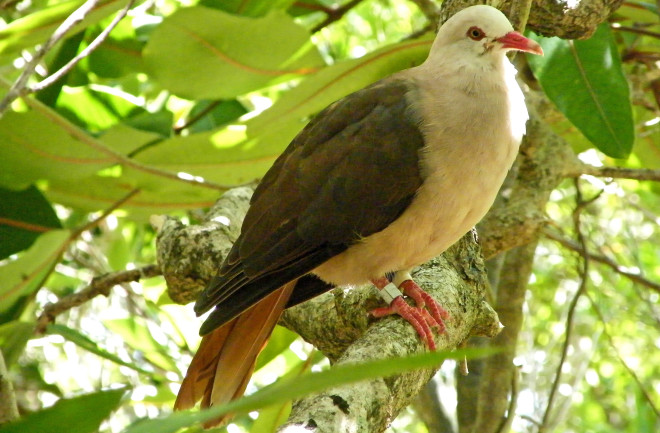 A genetic rescue project has restored the pink pigeon population from just 12 birds to over 400 today. (Vikash Tatayah/Mauritian Wildlife Foundation) “Voldemort outlived Harry Potter,” Christelle Ferriere tells me as we walk around the small, uninhabited island of Ile aux Aigrettes, off the east coast of Mauritius. “Whoever bands them gets to name them,” she explains. Ferriere is a bird expert with the Mauritian Wildlife Foundation (MWF) and the fantastical beasts she was referring to are pink pigeons. Pink pigeons are native only to Mauritius. And in 1990, the population was down to 12. These unique birds faced a fate similar to their extinct cousin, the dodo — the last sighting of which was reported in 1662. But an intensive conservation project brought the pink pigeon population up to 400 within two decades, nearing the team’s goal of 600. “But getting those last 200 has not been easy,” says Vikash Tatyah, MWF’s conservation director. And there are still challenges ahead, he says. Unlike the mainland, which is of volcanic origin, Ile aux Aigrettes is made of coral limestone. The island was declared a nature reserve in 1965. And today, 35 pink pigeons live here. You arrive by crossing glistening green-blue waters from the mainland. Stepping onto the island is like stepping back in time. Its area covers about 67 acres, but it’s still large enough to contain ghosts of several lost Mauritian species, including the infamous dodo. Yet this island is still full of hope. Upon arriving, we are checked to ensure no unwanted seeds or guests have hitchhiked a ride that may disrupt the conservation work on the island. Like the dodo, one main cause for the pink pigeon’s decline is predators like rats and cats that steal eggs and fledglings. And even the wrong plant growing on the island could have a detrimental impact to the closely monitored habitat.

The view of the main island of Mauritius from the islet of Ile aux Aigrettes. (Credit: Stephen Cussen) There are no paths, you just have to watch your step — look out for coral embedded within the ground, hanging roots of ficus trees, untouched white ebony trees and newly planted endemic seedlings. Exotic birds call, native fruit bats hang, indigenous ornate day geckos scamper, and giant Aldabra tortoises, with names such as ‘the ghost’ and ‘big daddy,’ roam around. Conservationists have carefully considered every plant and animal on this island. That effort has led to the restoration of the forest and reintroduction of endangered species that had completely disappeared from the island.

Not pink in the typical sense, their pale pink bodies and brown wings can make them look grayish at a distance. Their existence was once controversial. The initial project was led by Welsh biologist and conservationist Carl Jones, who was criticized for his methods, which included moving eggs from nests. Decades later, he has been hailed for bringing nine critically endangered species back to Mauritius, including the pink pigeon. He was awarded the Indianapolis Prize of conservation last year. “Captive breeding means they took the pigeons, had them breed in captivity and let the parents rear the squabs, or even hand reared them,” explains Ferriere, referring to the baby pigeons. “Another method was cross fostering, which is when the eggs were incubated and squabs were reared by another species, Barbary doves.” But there’s still work ahead. Forest quality is declining, Tatayah says, which affects how much food animals have. And pink pigeons are still up against a thriving predator population, as well as diseases and weak genetics. To tackle some of these challenges, the team helps feed the endangered birds on the island. “Pink pigeons are fed maize and wheat every week,” Ferriere says.

Careful restoration of the forest has allowed the reintroduction of endangered species like the pink pigeon. (Credit: Stephen Cussen)

Eggs in One Basket

The team is slowly releasing more and more sub populations of birds across Mauritius and its islets. Bird populations typically go through cyclical changes anyway, Tatayah says. “But to overcome this, the only thing we can do is to release pink pigeons in different locations across Mauritius.” They need to spread across, you would not want to put all your eggs in one basket, he says. As was the case with the dodo, deforestation is still a real threat. Mauritian forests — the good quality portion, anyway — are now just two percent of what existed back when the dodo was alive in the 15th century. So, until this habitat is carefully restored, pink pigeons and other precarious species will need a helping hand from bold conservationists. And Voldemort.