After thriving for 200 million years, ancient sturgeon were wiped out in the U.S. by fishing and industry. Now they're on their way toward making a comeback. 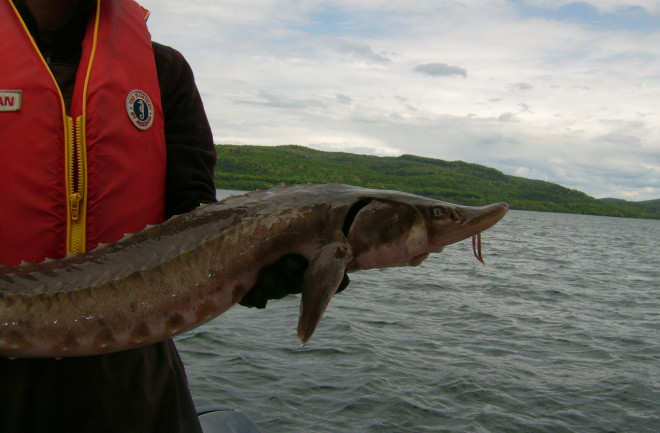 For millions of years, an armored behemoth has navigated its long nose through North American waterways. The lake sturgeon, which can reach six feet long and live to be 150 years old, are thought to be the oldest fish species in the Great Lakes ecosystem.

“The times that I've been able to go out into the field and handle these fish, it is just amazing,” says Amy Welsh, a conservation geneticist at West Virginia University. “They're like gentle giants. You'll bring them up and they're just super low key and laid back.” The only reason Welsh is reaching out to hold sturgeon is because tribal bands, biologists and other conservationists are bringing the ancient swimmers back to the rivers and lakes they used to inhabit — and the process is nearly as slow and long-lived as the fish themselves.

Researchers think that sturgeon first evolved about 200 million years ago, putting them alongside dinosaurs at a time when land began breaking into today’s continents. The group now contains 27 species, only one of which — the lake sturgeon — is native to the Great Lakes. And compared to how long lake sturgeon have lived in North America, the time it took white settlers to eliminate the fish from some waterways was remarkably fast. Commercial fishing, which took off in the Midwest in the early 1800s, saw sturgeon as massive nuisances that shredded nets meant to catch other fish. Boats eventually caught lake sturgeon strictly to stack the carcasses on beaches to burn. The perception flipped in the 1860s: Smoked sturgeon meat and the fish eggs, better known as caviar, became popular menu items. Fishers in the Great Lakes pursued the fish even more aggressively. From 1895 to 1905, the numbers in Lake Eerie fell 80 percent.

Compounding harms to lake sturgeon have kept numbers low for the past century. The species is considered threatened in 19 of the 20 states in its historic range, and many of its ancient habitats now lack the fish completely. In fact, estimates of what rivers and lakes the sturgeon should be in might be missing bodies of water where the fish disappeared from before people started documenting its whereabouts.

Return of the Dinosaur (Fish)

And as long as the sturgeon have been missing, people have wanted them back. Besides being integral pieces of their native ecosystems, the fish are culturally and spiritually important members of the landscape for the Ojibwe, Borkholder says, which is why the Fond du Lac band is working to reintroduce them to the St. Louis waters. Some biologists also think higher lake sturgeon numbers could help maintain invasive species populations that have proliferated in the same areas, Welsh says.

In the 1980s, biologists set out to accomplish what their predecessors had failed to do in the late 1800s: Bring lake sturgeon back to their habitats. Restoration efforts kicked off in the Mississippi, Missouri and St. Louis rivers, with Borkholder joining the last one in the early 1990s. After finding healthy sturgeon populations to tap into — Borkholder won’t say where to protect them from poachers — biologists collect eggs and sperm to breed the fish in their labs before releasing them into a new river. And then the restoration team repeats the process for 20 years or more. “Stocking for 20 or 30 years is the bare minimum,” Borkholder says. It’s very, very slow.” To keep as much genetic diversity as possible, the restoration crews will only add the offspring of a few sturgeon a year and only a handful from each class will survive to adulthood.

The goal is to eventually have sturgeon come back to their introduction site to breed and keep their own population going, says Welsh. Since they can linger on the planet for over a century, sturgeon take their time developing. A male might be 15 before he can reproduce, while a female can take closer to 30 years. “In general, you're not going to really determine whether the reintroduction was successful until about maybe 20, 25 years after you started stocking,” Welsh says. Only recently have programs started in the 1980s begun to show results.

Welsh is one of the geneticists helping evaluate the success of the St. Louis River restocking effort. After collecting fin clips from sturgeon swimming around the stocking sites, feeding grounds and spawning areas, Welsh and her team looked to see how old the fish were and who they all descended from. The genetic analyses showed the restocking effort worked. New sturgeon are reproducing and giving the river a population with as much genetic diversity as their relatives swimming in Lake Superior.

The sturgeon gains come with caveats, however. There was evidence that some of the introduced fish were making their way downriver and into Lake Superior to spawn with those existing wild sturgeon, and ideally, the groups stay genetically distinct. Also, while it’s heartening to see the new residents are as diverse as the existing populations, wild sturgeon might not be the best benchmark for ideal genetic variation as their own numbers have diminished over the decades, Welsh says.

In one part of the St. Louis River, sturgeon come back and breed — but after the fish grow to be a few years old, they disappear, Borkholder says. The team can’t figure out what’s happening, and are working with other scientists to see if contamination in the water might be killing them off. “There's a bottleneck in there that we don't know what's going on and it has been a source of frustration,” Borkholder says.

Borkholder is set to retire in a year. He’ll hand off caring for the St. Louis River sturgeon, a job he inherited from his predecessor, to someone else, who could very likely hand over datasets and information to yet another biologist. "It takes basically individuals career and a half to see any kind of results from stocking efforts," he says. And hopefully, several careers down the line, the fish he and his colleagues introduced will be the old, slow gentle giants other scientists get to witness.