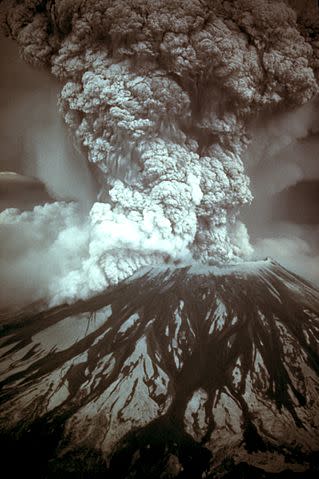 Step aside, crystal balls---another kind of crystal could help scientists forecast eruptions. The structure of microscopic crystals in lava oozing out of volcanoes give clues into when and how a volcano will erupt, according to a study

just published in Science. For six years after Mount St. Helens infamously blew its top in 1980

, the volcano in Washington continued to spew and sputter, erupting periodically. Each eruption brought more magma to the surface, and crystals embedded in the magma are snapshots of what happened inside the volcano just before each eruption. They contain concentric circles of elements like iron and magnesium, just like tree rings. Volcanologists examined over 300 of these crystals from Mount St. Helens, each no more than 1/10 of a millimeter in size. ScienceNOW explains how these crystals could help predictions:

Crystals start to build up a year prior to eruptions and peak just before an explosion happens...Crystals with magnesium-rich rims and iron-rich cores, which signify heating from the intrusion of new magma, were associated with deep earthquakes. A spike in these magnesium-rimmed crystals also occurred just prior to the massive 18 May [1980] eruption, indicating that pulses of new magma preceded the blast. Crystals with iron-rich rims and magnesium-rich cores, which form when the magma is degassing and cooling, corresponded with peaks in sulfur dioxide gas release. These crystals peaked prior to later eruptions at Mount St. Helens.

Keeping tabs on the numbers of crystals present in lava, along with their chemical make up, could thus provide some advance warning of eruptions. Scientists are still learning from the big Mount St. Helens eruption more than 20 years later. The magnitude of that eruption caught scientists by surprise, and even now, volcano prediction

, which mostly tracks seismic activity and gas emissions, is an imprecise science. These small crystals could be a valuable new tool. [via ScienceNOW