How Climatic Changes Toppled The Ancient Megacity Of Angkor 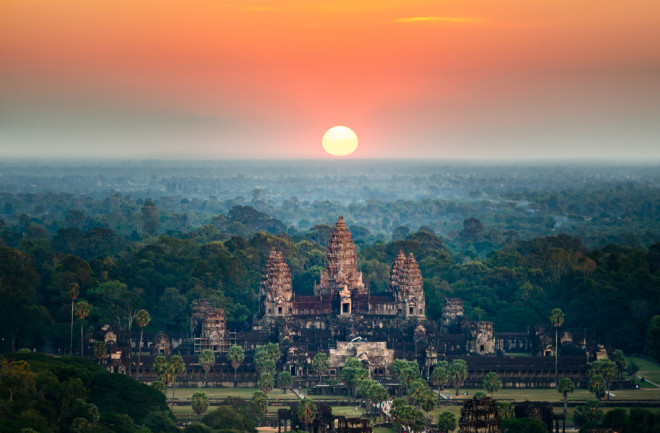 Angkor, one of the most significant archaeological sites in Southeast Asia, was a thriving metropolis at the center of the Khmer Empire in the 13thcentury. Then its inhabitants suddenly left town. Now, researchers find abrupt climatic changes and vulnerable infrastructure led to the city’s demise. It’s a cautionary tale for modern cities, many of which are already feeling the stress of climate change.

Once a vast, urban hub, Angkor was the capitol city of a kingdom that stretched from the tip of the Indochinese Peninsula to modern Yunnan Province in China and from Vietnam to the Bay of Bengal. By the 13thcentury, the city itself covered at least 100 square kilometers. Over 600 years, ruling kings added to the metropolis, building majestic monuments including Angkor Wat, a Buddhist temple that is a central tourist attraction near the modern-day city of Siem Reap in Cambodia. Historical accounts say Angkor was a bustling megacity into the late 13th century. But, the next available record from a few hundred years later indicates the city was abandoned, the jungle encroaching on its temples.

Experts debate what led to the city’s collapse. Some believe the Siamese overthrew Angkor; others say religious conversions and civil wars upset the social balance. Yet, recent evidence from remote mapping of the region suggested the city’s infrastructure played a role. During its reign, Angkor established an extensive system of waterways. The complex network of canals, moats and reservoirs to capture, store and distribute surface water likely provided water for agriculture and controlled flooding from seasonal rains. But in the late 14th century, the area experienced summer monsoons so intense they damaged the water management network.

Daniel Penny, a geoscientist and anthropologist at the University of Sydney in Australia, and colleagues wanted to find out whether the atypical rainfall tipped the city’s infrastructure past its capacity and led to the city’s downfall. So the researchers built a model of Angkor’s water infrastructure network based on comprehensive archeological maps. Then they subjected the simulated waterways to flooding. The model revealed large floods could quickly destabilize the city’s water system thanks to feedback from erosion and sedimentation, the researchers report today in the journal Science Advances. The results match up with physical evidence of the system and rainfall records over Southeast Asia from the 14th century.

The researchers say the city’s infrastructure — developed over successive construction efforts built on top of and dependent on each other—was vulnerable to climatic changes. That breakdown contributed to the city’s collapse, and it’s a lesson for urban architects today, they say. Infrastructure designed to be modular and redundant would help to minimize disruptions of basic services and ease repair after damage occurs, something only more likely as climate change progresses.