House GOP to Humanity on Global Warming: Put on This Blindfold and Keep Marching 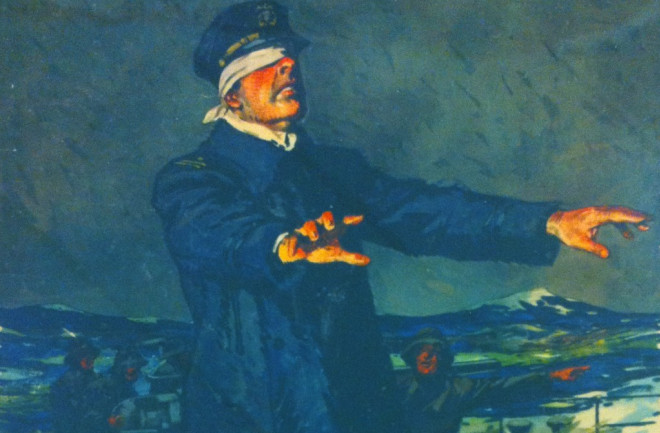 Credit: Adapted from Andrea Wright, Flickr Creative Commons In case you haven't heard, Republicans have pushed through a spending measure in the House Science, Space, and Technology Committee that would slash more than $300 million from NASA's Earth science programs. They argue that NASA should get back to its true mission: Exploring space, not studying and monitoring Earth. Republican Senator and presidential candidate Ted Cruz summed up the GOP's argument during a Senate hearing in March (as reported by Andrew Freedman of Mashable):

"Almost any American would agree that the core function of NASA is to explore space. That's what inspires little boys and little girls across this country." "I am concerned that NASA in the current environment has lost its full focus on that core mission."

What to make of this?

Let's put aside the obvious fact that Earth is a planet — our home planet — and thus arguably deserves at least as much attention as, say, Mars.

Earth to House Republicans: What about this photo do you not understand?. . . Apollo 8 hand-held Hasselblad photograph of a half illuminated Earth taken on 24 December 1968 as the spacecraft returned from the first manned orbit of the Moon. The evening terminator crosses Australia, towards the bottom. India can be seen at upper left. (Source: NASA) Never mind that when Congress passed the 1958 law establishing NASA, it stipulated that the agency's mission should include "the expansion of human knowledge of phenomena in the atmosphere and space." (Emphasis added) Forget that a focus on planet Earth was formalized by Congress in 1976 with an amendment to the Space Act, and that this has been part of NASA's mission ever since. Here's how that focus is expressed in its current mission statement (with emphasis added):

Our mission: Drive advances in science, technology, aeronautics, and space exploration to enhance knowledge, education, innovation, economic vitality, and stewardship of the Earth.

NASA has more than a dozen Earth science spacecraft in orbit studying all aspects of the Earth system (oceans, land, atmosphere, biosphere, cryosphere), with several more planned for launch in the next few years. (Source: NASA) The arguments of Ted Cruz and his Republican compatriots in the House are disingenuous. Their primary motive is not to get NASA back to where it once belonged. It's to do everything possible to cripple research into humankind's impact on planet Earth, most especially global warming. And that's like tying a blindfold on humanity so that we're incapable of seeing treacherous but politically inconvenient hazards ahead. This latest effort by the GOP in the House of Representatives to advance the cause of global warming denialism harkens back to the Presidency of George W. Bush. Back in 2006, the words "to understand and protect our home planet" were removed from NASA's mission statement of the time. As Andrew Revkin reported in the N.Y. Times, the stated aim was "to square the statement with President Bush’s goal of pursuing human spaceflight to the Moon and Mars." But then, as now, the underlying motive was pretty clear: a shameful political attack on research essential to giving us a clear view of where we are headed as a species on the only planet that can sustain us, at least for the foreseeable future.

If we fail to rein in emissions of carbon dioxide and other greenhouse gases, the colors on temperature anomaly maps like this one for March, 2015 will continue to get redder and redder. (Source: NASA — of course!) It's tempting to dismiss the current effort to defund NASA's earth science research as political shenanigans designed to fire up the Republican base as the presidential election season gets underway. But that would also be like blindfolding yourself to reality. These cuts may well fail to make it into the final budget that Congress sends to President Obama. But there is a fairly decent chance that a Republican like Ted Cruz will take the White House in the next election. Republicans would then control all the levers of our national legislative machinery. Think about it.