Holy Toledo! This Nasty Lake Erie Algae Bloom is the Likely Source of the Toxin Causing Your Drinking Water Woes 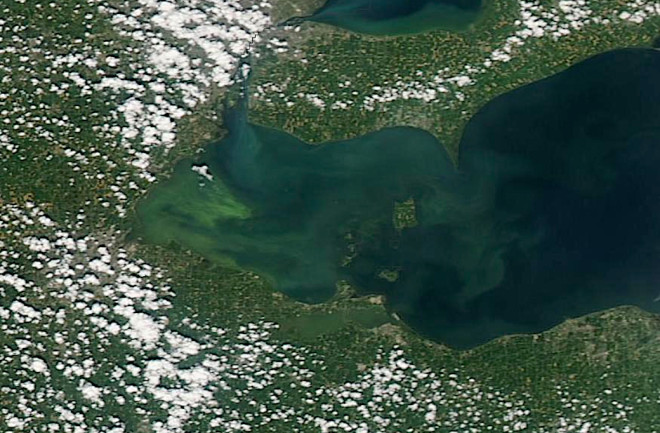 An algae bloom in the western part of Lake Erie just offshore of Toledo, Ohio is visible in this image captured today (Aug. 3) by NASA's Terra satellite. Do you see it? The green slime at the western end of Lake Erie in the satellite image above? That could be the source of the toxins that have caused the city of Toledo, Ohio to impose a drinking water ban affecting 500,000 people. The ban continued today, as further testing revealed evidence of the toxin microcystin in a drinking water plant. Microcystin is produced by blooms of cyanobacteria, also known as blue-green algae. In the image from NASA's Terra satellite above, a widespread bloom is evident; whether it contains the the cyanobacteria that produce microcystin I can't say for sure. But I'd put money on it. I didn't want to say this in the headline, because I didn't want to seem sensationalistic: Mycrocystin-LR, which is commonly produced by cyanobacteria blooms, is actually more toxic than sodium cyanide. So no wonder Toledo imposed the drinking water ban! According to an "urgent water notice" from the city:

Chemists testing water at Toledo’s Collins Park Water Treatment Plant had two sample readings for microcystin in excess of the recommended “DO NOT DRINK” 1 microgram per liter standard. This notice applies to ALL customers of Toledo water.

What happens if you should drink the stuff?:

Consuming water containing algal toxins may result in abnormal liver function, diarrhea, vomiting, nausea, numbness or dizziness. Seek medical attention if you feel you have been exposed to algal toxins and are having adverse health effects. Contact a veterinarian immediately if pets or livestock show signs of illness.

Folks in Toledo haven't been the only people to be afflicted by a nasty algae bloom recently. It happened last week across the Atlantic in the Baltic Sea. I wrote about it here (and included some icky pictures). Since that bloom affected a sea, as far as I know it did not impact drinking water supplies. But it was widespread and washed ashore in Sweden. Why do these things happen? As I wrote in my post about the Baltic bloom:

Although blooms can be a completely natural phenomenon, we humans have devised a special recipe that seems to cook up big batches of the stuff:

Half a million people are left scrambling to find drinking water.