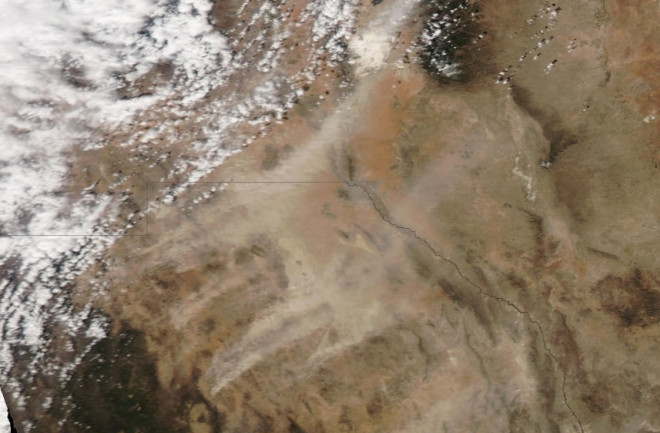 Blowing dust in Mexico, and from the White Sands of New Mexico, was visible to NASA's Aqua satellite on Wednesday As a huge storm began barreling into the Southwest on Wednesday, high winds kicked up large amounts of dust, as can be seen in the satellite image above. In the picture, thick dust plumes can be seen streaming toward the northeast from Mexico, along with one particularly prominent plume from the White Sands of New Mexico. (The whitish patch visible toward the top of the image.) The hashtag "#haboob" made the rounds on Twitter late on Wednesday, along with a kind of cool Instagram photo of what might be a dust storm moving in on an undisclosed location. A satellite image posted by meteorologist Brad Panovich also got some traction. And the ever awesome John Fleck of the Albuquerque Journal had this to say:

We’re at that awkward point in New Mexico’s drought where a “snowstorm” may need to be renamed a “dust storm.” As winter weather began moving in Tuesday from the west, the Albuquerque Health Department issued a blowing dust advisory, with high winds expected across much of New Mexico.