The worst industrial spills call for something stronger than the old-fashioned bar sitting in your soap dish. 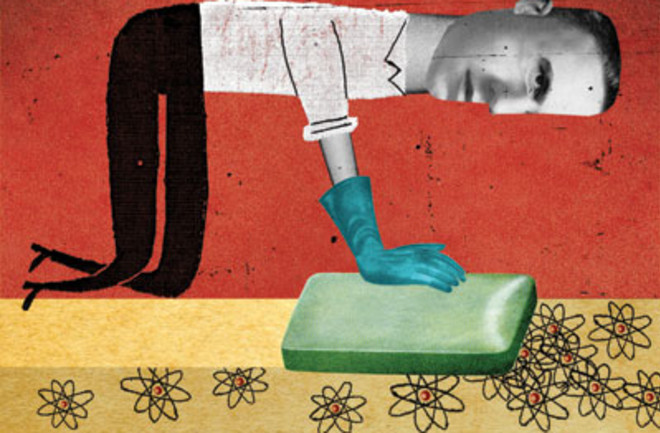 New-age soaps can respond to light, acidity, temperature, pressure, or magnetism—so they clean up just the right nasty atoms. | Illustration by David Plunkert

Between freak Arctic melting, Japanese nuclear melting, and antibiotic resistance popping up everywhere, I can’t help but see the world as tiptoeing into pre-apocalypse. If there is some sort of crapstorm coming and I’m lucky enough to survive it, there’s one thing I know for sure: I’m going to need a really good hand-cleaner for the aftermath. When I come in from a hard day of zombie hunting, it won’t be just dirt that I’ll need to get out from under my fingernails.

Actually, I could use that doomsday soap now—or rather, we all could. That’s because most of the human race has no intention of patiently waiting for an unspecified apocalypse and has already gotten a head start on mass despoiling. So far the tides of toxic waste and exploded-oil-rig crude haven’t made it as far as my sleepy burb. But right now somebody somewhere is facing a mess that Softsoap won’t make a dent in.

Hold that last thought—soap is, in fact, exactly what some of the world’s smartest cleanup experts are now touting for the next big spill. You might suppose that scrubbing bubbles would be a poor choice of weapon against giant blobs of crude, especially compared with giant oil-corralling booms and high-tech oil-skimming robots. But soap has some important advantages: It really cleans things up (that’s what it is made to do, after all), and at the end, all that oily soap can be neatly and completely gathered up with a magnet.

You didn’t know soap was magnetic? You’re obviously using one of those old-fashioned iron-free soaps. The new stuff can be found in the laboratory of research chemist Julian Eastoe at the University of Bristol in the U.K. Sure, any numbskull can pour a bag of iron filings into a jug of Tide (trust me, my wife is still screaming). The trick is to get the iron to chemically bond to the soap—or as chemists like to say, the “surfactant”—and in sufficient quantity to enable the ironic solution to be pulled by a magnet.

A Magnetic Mop for Oil

Eastoe played around with a number of surfactants and iron compounds before hitting on solutions of iron salts, related to the surfactants in mouthwash and fabric softeners but with some magnet-friendly metal thrown in. In theory, this soapy slop could be heaved by the tankful onto oily shorelines to mix with the spilled crude, and then sucked up by magnet-equipped vehicles or volunteers, leaving behind none of the toxic solvents or messy detergents commonly employed in cleaning oil. “It would be especially useful for cleaning contaminated seabirds,” notes Eastoe, who has obviously never had to wield a magnet against an infuriated, oil-and-soap-covered seagull.

Pennsylvania State University materials science professor T. C. Chung has come up with a different take on an oil-spill cleaner. Chung was working for Exxon in 1989 when that company’s notorious Valdez tanker spilled 11 million barrels of crude into Alaskan waters. When BP’s Deepwater Horizon disaster blackened much of the Gulf of Mexico in 2010, Professor Chung was determined to become Professor Clean. “I saw that in all that time, we still hadn’t come up with a better way to clean up oil than a paper towel,” he says. “I knew there had to be a solution.” That solution, he decided, was Petrogel.

Chung worked with a cheap, plasticlike compound called a polyolefin, a long-chain molecule. Though the stuff isn’t technically a surfactant, he chemically tacked on branches to the molecular chain and got it to form a molecular web that surrounds particles of oil. The result: One pound of Petrogel will combine with more than 40 pounds of oil, preventing it from dispersing into the ocean or from sticking to sand or dolphins. “You could spray it on a spill as powder, trap all the oil as gel, and then recover it with skimmers,” he says. And since a polyolefin is made up of hydrocarbons, like oil, the easy-to-handle gel could be refined as if it were plain old oil. It wouldn’t have to be dumped somewhere, and some of the costs of recovery could be, well, recovered.

The fact that chemically hot-rodded Jell-O and fabric softener turn out to be mighty weapons in the fight against catastrophic soilage might tempt you to rummage through your household items for other potential tools. You need go no further than your pocket or purse, due to the work of a Michigan Technological University chemical engineer who has figured out how to turn chewing gum into another super-spill tamer. Gerard Caneba zeroed in on polyvinyl acetate, a major ingredient of gum. He discovered that this natural, biodegradable stuff needs only a bit of strategic molecular tweaking to become a surfactant that readily foams up in contact with water. “Everyone knows chewing gum is good for making bubbles,” he says. “It’s already pretty close to being a detergent.” Oh Bazooka Joe, is there anything you can’t do?

The trick to making this gummy soap into an oil-fighter, Caneba found, was to manipulate the compound so that one part of the molecule latches onto water while another part cozies up to crude. The result is a liquid that, when squirted at the edges of a spill, forms a foamy barrier around it that will push the spill in the direction in which the liquid is applied. “If you try squirting water or other liquids at oil, they’ll just move around or through it,” Caneba says. “This foam will stay up against the oil and herd it.” It can even be sprayed upwards via an underwater pipe at the bottom of an underwater plume of spilled oil in order to bring it to the surface. The herding action can keep the oil from dispersing in the water and from reaching shorelines.

If you’re still not impressed with the mega-filth-fighting capabilities of this soapy gum, consider that it also works wonders against “red mud,” a highly caustic sludge left over from aluminum manufacturing; a recent red-mud spill in Hungary forced hundreds of villagers to evacuate﻿. When Caneba’s stuff is sprayed on it, a series of chemical reactions converts the mud into a nontoxic, foamy goo that can be compressed into a durable building material. “It would be great for patio tiles and ceiling insulation,” Caneba suggests. I, for one, am completely behind the idea of cleaning the planet while redecorating.

If oily Jell-O cannot mop up your toxic spill, maybe congealed soybean oil can. Building on research conducted at the Savannah River National Laboratory, a company called EOS Remediation in Raleigh, North Carolina, has found a secret ingredient that turns soybean oil into a gel. But here’s the interesting part: If you stir it up a bit, it temporarily becomes a liquid that can be pumped into soil that’s been contaminated with toxins. Once the liquid is in the soil, it reverts to gel form and stays that way for a long time—years, even. Taking advantage of that long lifetime, EOS laces its gel with toxin-eating bacteria, including one that can break down the chlorinated solvents commonly used to degrease machine parts. The idea is that the bacteria will remain in position for however long it takes to leave the soil squeaky clean—not counting the gel, which is basically edible at the end. It worked for cleaning up a wastewater site at Savannah River, though nobody actually showed up to dine on the end product.

Frankly, I’m doing a huge disservice to soap science by implying that all it can do is save the planet from toxic catastrophes. Eastoe, for example, envisions all kinds of surfactant-based miracles. “The chemical imagination runs wild with the possibilities,” he says. True, coming from a soap scientist, you might wonder if “wild” needs to be taken with a grain of sodium chloride. But Eastoe and other chemists are creating genuine supersoaps by finding ways to get surfactant molecules to lose their foamy properties [pdf] under particular conditions so that the foam can, in effect, be turned off and on at will.

Eastoe has created foams that can be switched on and off with light [pdf], so that if mixed with insecticides or herbicides and sprayed on plants, they could foam up only at night or only during the day, whenever they were most effective. He is considering drug-laced foam that could be swallowed by a patient and then de-foamed with an electric field so that it would drop its drug payload only when it’s at the right place in the body. And he points out that foam doesn’t just clean oil up; it can also produce it cleanly by helping to drag raw crude out of deep deposits.

So inspiring to me is this work that I’ve started experimenting with other household items to see if I can invent my own supersoap. I’ve already substantially contributed to the field by brilliantly ruling out organic ketchup and lite chocolate syrup as candidates. Though I have to admit, it’s hard to focus with all that screaming in the background.

David H. Freedman is a freelance journalist, author, and longtime contributor to DISCOVER. You can follow him on Twitter here: @dhfreedman.