Hidden Risks in a Warming Antarctic 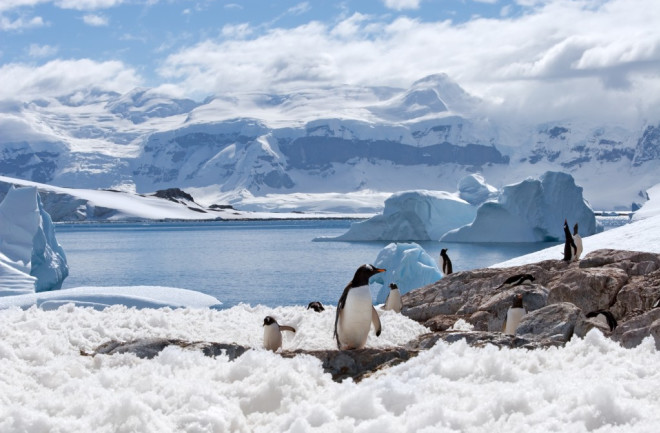 (Credit: Photodynamic/Shutterstock) As the rest of the world heats up and the Arctic hemorrhages ice, a different story is playing out in Antarctica. Total ice coverage there has actually increased, and temperatures have risen only mildly. As researchers have attempted to adequately model the changing climate, the Antarctic paradox has served as ammunition for climate change deniers and challenged climate scientists. But three recently published papers help explain why the Antarctic isn't falling in line with the rest of the world, while highlighting an overlooked trend in Antarctic sea ice.

One reason Antarctica has remained cold is due to the presence of the Antarctic Circumpolar Current (ACC), a wide band of slow-moving cold water that completely encircles the continent. The current keeps out warmer water that has driven changes in the northern hemisphere, and preserves Antarctica's vast shelves of floating sea ice. As a team of researchers from MIT and the University of Washington explain in a paper published in Nature Geoscience in May, global currents pull warm surface water away from Antarctica while frigid flows of centuries-old water from the deep rises to the surface — the last time this water reached the surface was before the age of machines. These currents move slowly, so this deep, cold water could potentially feed the ACC for centuries to come, they say. Even behind the buffer zone of the ACC, climatic mechanisms are acting to shore up Antarctica's ice. The natural topography of the continent creates icy winds that blow from the interior of the continent outward. Combined with currents near the shore, the winds concentrate sea ice in what researchers call the "Great Shield," where older, more resilient sea ice forms a barrier, allowing younger ice to form closer to shore. That conclusion comes from NASA researchers who, in a paper published in the journal Remote Sensing of Environment, say the presence of a hardened wall of thick sea ice is creating protected areas, which they call "ice factories", where ice shelves can form. In these sheltered areas, ice can form up to ten times faster, creating ice shelves that replace open water. In addition, other researchers have argued that a lower concentration of salty water at the surface in the Antarctic, a result of increased precipitation, has bolstered ice formation in the region, as it freezes more readily.

Not So Rosy After All

While Antarctica may appear to buck the trend of warming and sea level rise, a problem may be lurking beneath the surface. Scientists at the University of Edinburgh in the U.K. in May published a paper in Geophysical Research Letters reviewing satellite data from Antarctica over the past 40 years. They peered beneath the continent's glaciers to examine what's known as the "grounding line", or the point beneath the ocean where glaciers are no longer attached to the ground and float freely as ice shelves. The researchers used the movement of grounding lines as proxies for the mass of the ice sheets — the further offshore a grounding line is located, the more weight is required to keep it pushed firmly to the ground. They looked at the Bellingshausen Sea in West Antarctica and found a consistent pattern of retreat in the grounding line, an indication that the ice sheet was losing mass. And the process speeds up as the ice shelves get smaller, rendering them unable to hold back the mass of ice packed up on land behind them. The massive glaciers currently held in place by the ice shelves could all wind up in the ocean, introducing hundreds of thousands of square miles of ice into the sea. While the researchers looked at only one glacier, the same process could be happening to ice shelves around the continent. What's more, the researchers fear that an area called the Venable Ice Shelf could be susceptible to the same fate as nearby Pine Island Glacier. That ice mass rests atop a large trench, which was gradually exposed as it was pushed backwards. When the sea finally breached the trench, it rushed in and sealed the glaciers fate. The presence of a large body of warm water underneath the ice destroyed the glacier from below. They believe that Venable covers a similar formation, and if the trench is opened to the sea, a slow retreat could turn into a full-scale rout.