This unique landscape attracts researchers from around the world to study microbe evolution, scars of geological disasters and even how glaciers behaved on Mars. 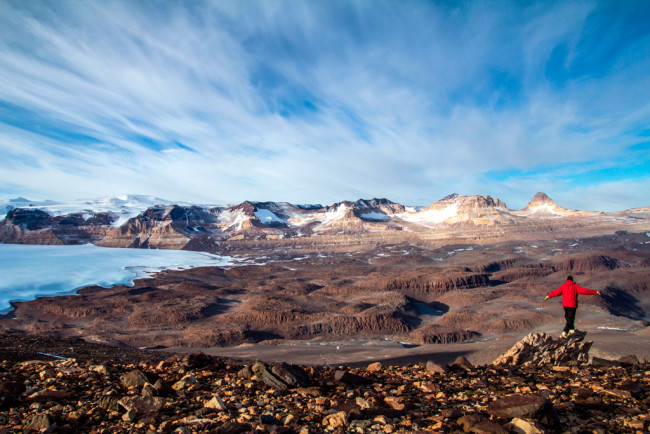 Mackay walks on a ridge high above the Labyrinth, formed in a devastating subglacial flash flood 12 million years ago. | Jennifer Berglund

What Flavor Will the Gene Popsicle Be?

In the desolate landscape of Antarctica’s Dry Valleys, it is nearly impossible to imagine life could exist, much less thrive. Yet buried beneath the frozen boulder fields, tucked between grains of sand and buried ice, there is a surprising amount of biodiversity.

In search of microscopic life, molecular ecologist Kay Bidle of Rutgers University looked for microbial DNA in the soil and ice core samples Marchant gathered for him during one of his expeditions. Though degraded, multitudes of ancient microbial DNA fragments, some 8 million years old, were suspended inside the ice samples. Bidle found the Dry Valley soil microbes were not much different from those found elsewhere in the world.

For a genome to survive in a cell, it needs a chain of at least 160,000 base pairs of DNA fragments intact — the largest soil microbes have about 12.2 million. Bidle didn’t see lengths like that; the largest segments he found in the ice core specimens were just tens of thousands of base pairs long. Older core samples contained even smaller, more degraded chains. And yet, when Bidle cultured his samples, they grew into living organisms — even the oldest ones. Hiding among the masses of ancient, degraded DNA, there must have been a few intact specimens that persevered all those millions of years. They had survived, Bidle hypothesizes, in a dormant state, a sort of hibernation.

If the Dry Valleys ice melts, entirely new life forms could spring up. They would be created through the process of lateral gene transfer, in which microbes incorporate loose bits of genetic material from other microbes into their own. The melting of the oldest ice would expose DNA fragments entombed millions of years ago, creating a sort of gene Popsicle: Existing microbes could incorporate the released genetic fragments, leading to new species.

Many believe something like this happened 570 million years ago, when our planet may have been completely covered in ice — Snowball Earth, it’s called. That ice encased microbes, just like Bidle’s specimens from the Dry Valleys. When the Snowball melted, there was an explosion in the diversity of microbial species in the fossil record. The gene Popsicle effect may be why.

With more ice melting in this era of global warming, could we have an alien microbial invasion on our hands again? Not likely, Bidle said. Any species released via the gene Popsicle effect probably won’t make a dent in the established microbial order. Instead, complex modern microbes, which would vastly outnumber any new Antarctic life forms, would probably just gobble up the more primitive organisms. 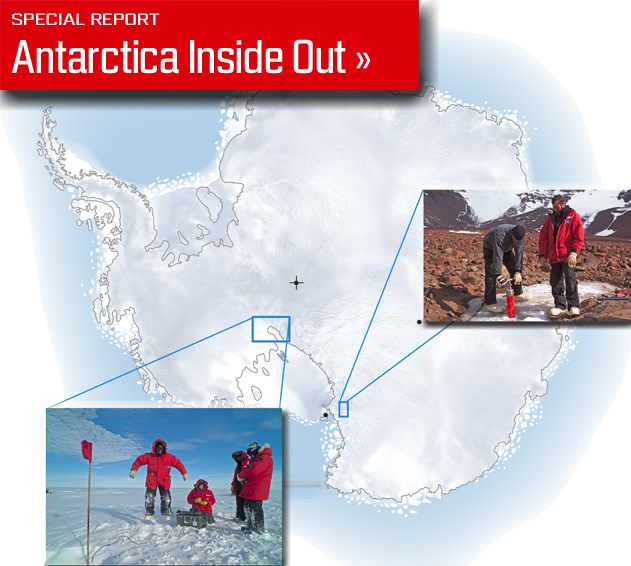 Solving the Puzzle of the Labyrinth

Beneath a glacier in the Transantarctic Mountains some 12 million years ago, the downhill flow of a massive, growing reservoir of meltwater was restrained by walls of ice. As the reservoir grew, it became too heavy for the walls to hold. They gave way, releasing an explosive surge of water nearly 13 times the volume of water draining through the Amazon River.

As it ripped through the valley below, the water gushed into the bedrock, tearing away chunks of rock the size of refrigerators, hurling them miles down Antarctica’s Wright Valley. In its wake, the subglacial flash flood left a spectacular maze of channels, some hundreds of meters deep, incised into the stone, an intricate complex of meandering pathways called the Labyrinth.

It wasn’t easy to decode the history of this mysterious place. It may never have been understood were it not for the Channeled Scablands, a strikingly similar landscape in eastern Washington state, and a bit of meticulous sleuthing by geologist David Marchant and his graduate student, Adam Lewis.

A megaflood theory for the Scablands first appeared in the 1920s, but it wasn’t widely accepted until the 1970s, when geologist Victor Baker described the physical processes of major floods around the world. Features like giant gravel current ripples and displaced 65-foot-wide boulders in the Scablands could not be explained by changes in the nearby Columbia River, he wrote — the flow and volume of whatever water source formed them would have to be exponentially larger. In 2005, when Marchant and his team were exploring the Labyrinth, they noticed scouring patterns on the walls within the channels, hinting at a massive surge of water below a glacial surface. It was then they pieced the story together.

The subglacial megaflood, Marchant believes, occurred during the middle Miocene, a period 12 million to 16 million years ago. Antarctica cooled from a temperate climate with wet glaciers to the frigid climate and cold-based glaciers it has today. During the transition, ice sheets expanded, and meltwater accumulated below the ice at the edge of mountain divides, creating lakes below the glaciers. As the climate cooled, ice dams formed in mountain passes, including one above what is now the Labyrinth. As the lake beneath the glacier grew, pressure overcame the strength of the ice dam. Once the water broke through, nothing could stop its flow.

Smaller, so-called “proto-Labyrinths” exist elsewhere in Antarctica, suggesting catastrophic floods were probably not rare in the continent’s geologic history. Marchant suspects more of these landforms are buried under ice, which covers more than 98 percent of the continent.

Researchers searching for evidence of water on the Red Planet are finding some of their best clues in Antarctica’s Dry Valleys.

In the Dry Valleys below the northwestern slopes of the Transantarctic Mountains, where buried ice never melts and humidity stays at some of the lowest levels seen anywhere on Earth, the world begins to look a lot like Mars. The Dry Valleys’ most striking similarity to the Red Planet is in glacial deposits laid down by ice so cold that meltwater never reworks the surface features.

Researchers in the 1970s, in the early days of the Viking Lander program, were the first to suggest that Mars had significant ice, but the actual evidence has been scarce. For most of the past few decades, scientists were looking for the wrong things. In all but the coldest regions on Earth, there is a layer of water between the glacier and the bedrock, which makes the mass of ice above mobile. These so-called wet-based glaciers produce characteristic ice and water-worn landscapes as they move down mountain slopes that are covered by thick sheets of stratified debris and long, winding ridges of sand or gravel. The valleys appear as if they were cut, or finely chiseled.

But cold-based glaciers, like the ones on Mars and in the Dry Valleys, are far too frigid to produce anything like that. Liquid water simply can’t exist and therefore cannot shape the landscape in the same way. On both Earth and Mars, rocks and debris within cold-based glaciers can be exposed as overlying ice sublimes, turning from a solid directly into a gas. These rocky coverings are called sublimation tills — they insulate the ice and eventually, if thick enough, inhibit additional sublimation. In extreme cases, the ice can be preserved for millions of years.

In ongoing research, geologist David Marchant and his team have studied a number of sublimation tills, documenting subtle changes in the land surface as underlying ice flexes and cracks with seasonal temperature changes. As temperatures drop from balmy summertime averages of 14 degrees Fahrenheit to as low as minus 50 in winter, buried ice contracts, forming vertical fractures that extend down into the glacier several yards, and can be several feet wide at the top. Loose rock and debris fall into these cracks, building up to create what looks like rock piles separated by deep troughs.

These features are indicative of shallow, buried ice — they appear throughout the coldest regions of the Dry Valleys, and they are littered across the surface of Mars. Where there is ice, there must have been water once — and possibly life. This information guided Phoenix, the rover deployed before Curiosity, as it searched for microbial life on Mars. Like Earth, Mars has endured ice ages similar to our own. But without the complex influence of global oceans, widespread life and active plate tectonics, Mars’ climate history is simpler than our own. If Marchant and his colleagues can decode the glacial and climate record on Mars, they can use fundamental concepts gleaned from the Red Planet to tackle our own.

The Government is Scaling Back Water Quality Protections. These Surfers are Picking up the Slack.