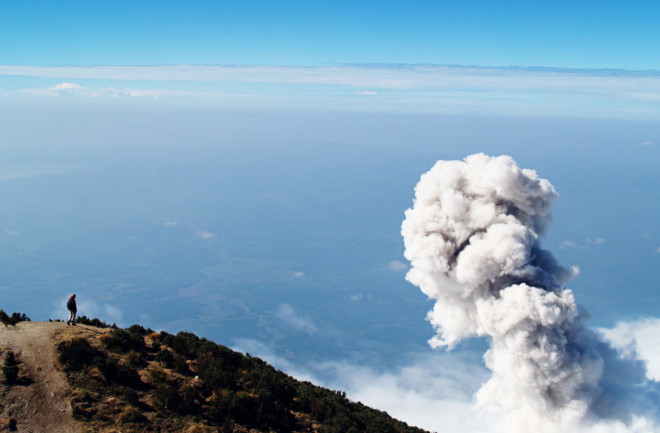 Over the weekend, Santa Maria’s Santiaguito dome complex had a few impressive explosions caused by the collapse of the domes that have been growing on the volcano. One of these explosions was captured in great detail by INSIVUMEH, the volcano monitoring agency of Guatemala. I’ve annotated the image to show all the pieces of such a vulcanian eruption. The plume of the explosion is formed by an explosion from the dome as it collapses, releasing pressure on the magma underneath it. This drop in pressure causes bubbles to form and bam! An explosion happens.

This explosion causes material to shoot upwards in the gas thrust portion of the plume. Now, volcanic plumes can be of a lot of different heights, from a 100 meters to over 50 kilometers. So why are they so different?

UPDATE August 22, 2016: I had some discussions with Rudiger Escobar Wolf, a volcanology graduate student at MTU who works on Guatemalan volcanoes and wanted to add some of his thoughts. He (rightly) thinks these explosions and pyroclastic flows are formed from overpressurization and explosion of a lava plug rather than a dome collapse. The difference is that you don’t need a large dome to form to cause these explosions to happen. Check out this video for evidence. Also, gas thrust is part of the upward force in the explosion. Convection due to the heat of the material helps it rise and spread out as well. A lot of the plume column itself is likely generated from the hot, turbulent ashy material rising.

In general, you can estimate plume height with an equation that relies on knowing something about the energy released during the explosion. If the eruption is a discrete explosion (rather than constant input of new magma), the height of the plume can be estimated as HT (height of the plume) = 1.37Q1/4, where Q is the energy released in joules. The relationship is a fractional exponent, so the plume height gets taller but at a declining rate, limiting the potential height of the plume even as you add more energy. You can get at that estimate of energy by looking at the eruption rate—how much stuff is coming out per second. The plumes from the recent explosions at Santiaguito have reached over 7 kilometers (20,000 feet) above sea level.

Once the gas thrust can’t fight against gravity anymore, the plume hits neutral buoyancy and starts to spread in that classic umbrella shape. This is how eruptions can spread ash large distances, with the ash moving in the prevailing winds as the plume unfurls. In this eruption from Santiaguito, there is fairly minimal spreading (so far) because the eruption itself is small and the winds aren’t too strong at the height that the plume reached. Those winds during an eruption can be the strongest control in the distribution of ash around the volcano. Ash from these explosions reached over 30 kilometers (18 miles) from Santiaguito (UPDATE: some reports have the ash moving as far out as 70 kilometers away!).

However, things that go up have to come down as well. The plume material can start to collapse and form flows of hot volcanic ash and gases, creating pyroclastic flows that move down the slopes of the volcano. The flows can be formed from the collapsing ash plume or even from the debris of the lava dome as it tumbles down the volcano. These flows are likely the most dangerous features of these styles of eruptions: The pyroclastic flows can wipe out entire cities. These dome collapse explosions are what did in the city of St. Pierre on Martinique in 1902, where over 27,000 people perished. In fact, these discrete explosions from collapse can be called Peléean or Soufrierean (after Soufrière Hills on nearby Montserrat) eruptions.At volcanoes like Santa Maria (above), dome collapse, explosions, and pyroclastic flows are common, sometimes occurring dozens of times in a few months. This means that the folks monitoring the volcano have to be vigilant because it is hard to predict when the dome might become unstable enough to collapse. It might be triggered by an oversteepening of the dome’s sides from new magma pushing up underneath. It could also be caused by earthquakes breaking away part of the dome. Even small steam-driven explosions (phreatic) might help destabilize the dome. Sometimes, domes can grow and not end up collapsing either.

Be sure to check out the Santiaguito webcam to see more explosions like this one.

Some other news from volcanoes around the world this week:

Fuego: Another one of Guatemala’s volcanoes produced lahars (volcanic mudflows). This lahar was generated due to heavy rains on the slopes of the volcano and thanks to its recent activity, there was a lot of ash and volcanic debris to remobilize down the river channels. Trees as large as 1-3 meters (3-9 feet) across were swept up in the mudflows from Fuego. The volcano is still producing over 10 explosions per day, some of which reached a kilometer over the volcano and spread as 12 kilometers (7.5 miles) away.

Popocatépetl: Similar explosive activity continues at Mexico’s most active volcano. Video of yesterday’s eruptions show the four discrete blasts that the volcano produced, spreading ash across the countryside around the volcano.