Here's What You'll Find in 3 Teaspoons of Rio's Water 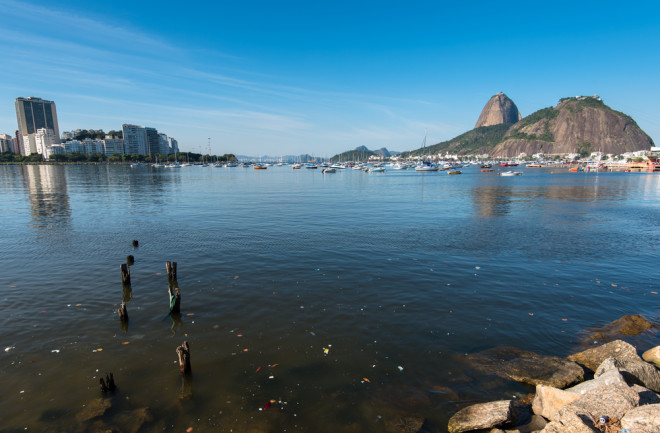 Trash in the waters of Guanabara Bay in Rio de Janeiro, Brazil. (Credit: Donatas Dabravolskas/Shutterstock) A single gulp of ocean water, or roughly three teaspoons, is all it will take for athletes and tourists to contract potentially deadly diseases at the 2016 Rio Olympics. That's the consensus of a recent study commissioned by the Associated Press looking at levels of viruses, bacteria and other microbes in the water of Rio de Janeiro's Guanabara Bay — home of historic Copacabana and Ipanema beaches. The study, carried out by an unnamed researcher at Brazil's Feevale University, reported initial results last year, and found viral loads up to 1.7 million times higher than what are considered safe concentrations in most countries. An AP article published this week reiterates those findings, and a biology professor at the University of South Florida offered some free advice: "Don't put your head under the water." But what, exactly, is swimming in a mouthful of water from the bay?

While the AP has not released the actual data from their study, the findings appear to agree with a different study also published last year from researchers in Brazil. That study focused on levels of bacteria and algae found in Guanabara Bay, home of the sailing events. Those researchers concluded: "The majority of the beaches within the bay are not appropriate for swimming." Here's a taste of what's in the water (at various concentration levels):

Many of the bacteria were present at extraordinarily high levels, meaning the risk of infection is frighteningly large.

Relative abundance of phylogenetic groups to metagenomes (at class level) in three sites of Guanabara Bay. (modified from Gregoracci et al., 2012) Along with the untreated waste, algae blooms are becoming more common, fed with an ample supply of phosphorus and nitrogen from the sewage and runoff. These blooms are known to produce harmful toxins, and suck up oxygen in the water, killing off the fish many residents depend on for their livelihoods. The unnaturally nutrient-rich conditions also favor particular types of bacteria over others, some of which can be harmful to humans. The AP found that 90 percent of sites sampled had worrying levels of adenoviruses, which lead to a host of infections, and Ipanema beach, and likely others, saw levels of rotavirus exceeding 32 million per liter. You don't even have to go in the water to be at risk — tests of the sand itself also found greater than average levels of viruses. Some species of bacteria break down in warm water and sunlight, both of which are ready commodities in Brazil. Viruses, on the other hand, don't disappear so easily.

Rio de Janeiro has for years been pumping large quantities of raw sewage into the bay, in addition to industrial waste from 16,000 sources and freshwater runoff, which also contains contaminants. It is estimated that as much as 18 cubic meters of raw sewage flows into the bay per second. However, plans to upgrade the water treatment system have repeatedly been put on hold. The Rio Olympics were meant to provide the impetus for the city to clean up its act, but the time for that has come and gone. In just a few days, Olympic athletes will be sailing, rowing and swimming in waters that are constantly subject to an influx of raw sewage, and which consistently contain far above safe levels of potentially harmful microbes and viruses.