It was only a matter of time, and it looks like that time has come... Drought and heat have caught up to California. As I write this, multiple wildfires are burning in San Diego County. 10News San Diego is reporting that one of the fires, which began at about 10:30 a.m. today, has destroyed as many as 30 homes in Carlsbad. In the face of the blaze, dubbed the Poinsettia Fire, about 15,000 residences have received reverse 911 calls urging the occupants to leave. So far, no deaths or injuries have been reported in that one, thank goodness. But other fires are blazing too — five more, according to 10News. Smoke from at least some of the fires, as well some burning south of the U.S.-Mexico border, is visible from space: 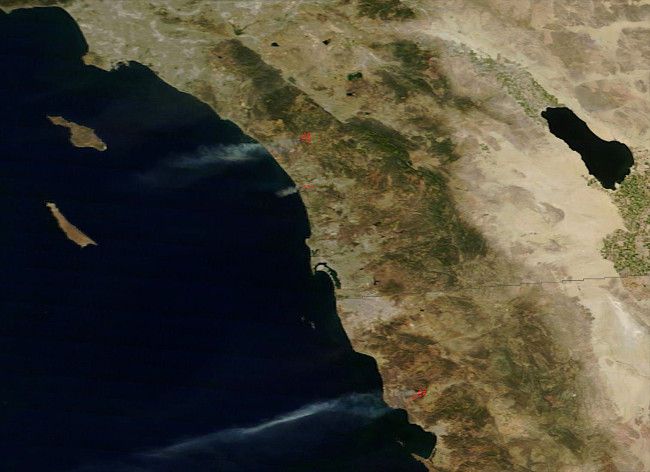 NASA's Terra satellite captured this image of smoke plumes streaming out to sea from a few spots north of the city of San Diego. Another smoke plume is also evident south of the U.S.-Mexico border. Red dots mark spots where an instrument on Terra detected fire. (Source: NASA) In an hour or so, images from the Aqua satellite, the twin of Terra, which acquired this one, will be coming in. I suspect they will be a bit sharper. If so, I'll update this post. Temperatures in the 90s along with Santa Ana winds have combined with record dry conditions to create the perfect environment for fire. 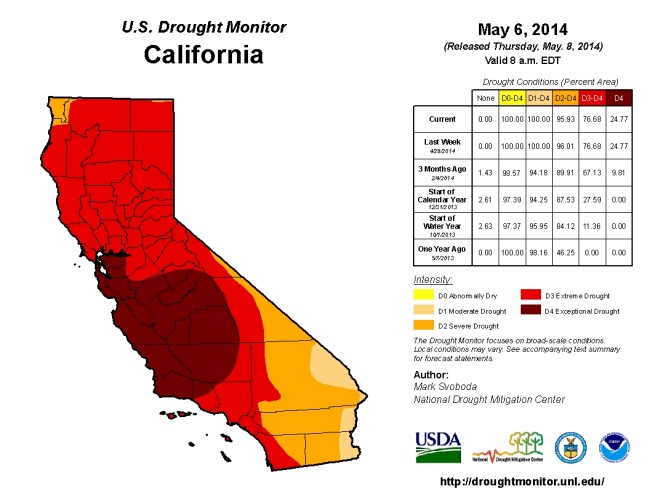 One hundred percent of the State of California is in drought right now, as the latest map from the U.S. Drought Monitor shows. A shocking 77 percent of the state is in extreme drought, including the area north of San Diego where the fires are burning today. Some improvement in weather conditions may be ahead, but the region is not out of the woods just yet. From the National Weather Service forecast discussion page

for this part of California:

.SYNOPSIS... HIGH PRESSURE WILL BUILD OVER THE WEST COAST THROUGH THURSDAY...WITH VERY HOT AND DRY CONDITIONS PREVAILING. STRONG AND GUSTY SANTA ANA WINDS WILL CONTINUE THROUGH TODAY...THEN WEAKEN A BIT FOR THURSDAY...BEFORE ENDING ON FRIDAY. A COOLING TREND WILL ALSO DEVELOP ALONG THE COAST ON FRIDAY...THEN SPREAD ACROSS THE INLAND AREAS THIS WEEKEND...

I have a bad feeling about this...