Here We Go Again... Super Typhoon Maysak Swirls in the Overheated Pacific Ocean — And it Just Set a Record

An animation of infrared satellite imagery shows Super Typhoon Maysak swirling in the Pacific Ocean. The storm's forecast track is superimposed. (Source: Cooperative Institute for Meteorological Satellite Studies) Micronesia's Caroline Islands have been taking a beating today from Category 5 Super Typhoon Maysak. As of 2 p.m. today EDT (morning on Wednesday in Micronesia), the Joint Typhoon Warning Center pegged Maysak's strongest sustained winds at 160 miles per hour, with gusts to 195 mph. This makes Maysak "one of only three Category 5 storms ever observed in the Northwestern Pacific prior to April," according to Jeff Masters of Weather Underground. Also, Maysak's development has caused two records to fall, Masters says:

The storm killed at least five people in Micronesia's Chuuk State even before it had strengthened to a super typhoon. As I'm writing this, there's no news yet from Yap State. But with such devastating winds combined with high seas, low lying islands in the storm's way surely are suffering a huge amount of damage. The animation of infrared satellite images at the top of this post shows Maysak swirling in the Pacific east of the Philippines, along with its forecast track. Cooler sea surface temperatures as well as wind shear are forecast to degrade Maysak's strength significantly when it approaches the Philippines on Friday and Saturday. We'll see how strong it is when it hits Luzon Island there on Easter Sunday. Right now the Joint Typhoon Warning Center is forecasting sustained winds of 100 miles per hour — enough to cause a fair amount of damage. The image of Maysak below was acquired by the MTSAT-2 satellite at 2 p.m. EDT today (morning on Wednesday in Micronesia). 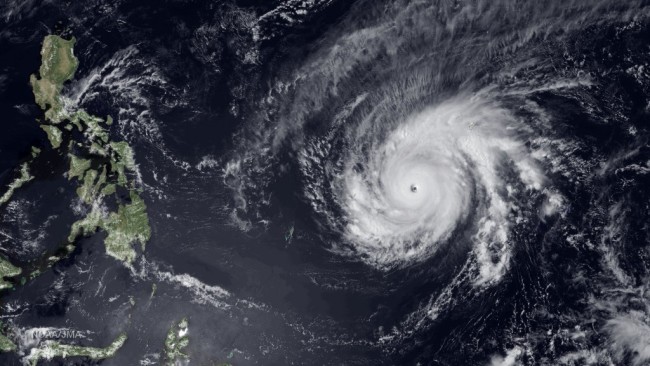 Typhoon Maysak in the northwestern Pacific, as seen by the MTSAT-2 satellite at 0430Z on March 31, 2015. (Source: NOAA) Unusually warm sea surface temperatures, courtesy in part of El Niño, are helping to fuel Maysak, as well as the early typhoon activity. So is a phenomenon known as the Madden-Julian Oscillation. Click here for an excellent explanation of the MJO phenomenon, as well as here for how it may be contributing to typhoon activity. 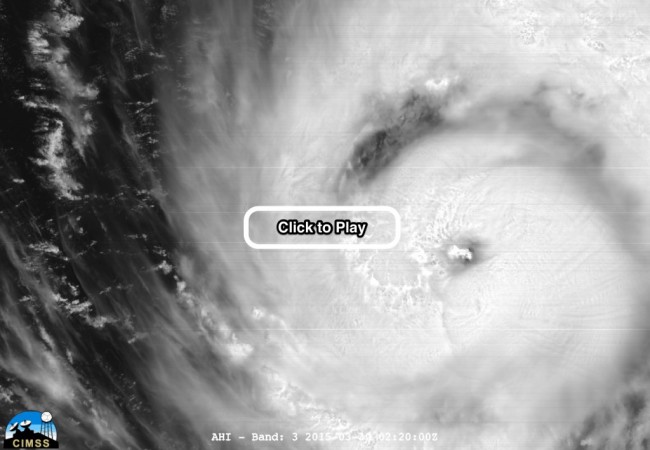 Screenshot from an animation of satellite images showing the development of Typhoon Maysak. (Animation: CIMSS) I'll leave you with this animation showing Maysak in close up. Note: It's a pretty big file, so it may take awhile to load.