Herds of Hoofed Herbivores Might Help Keep Permafrost From Melting

By compacting the snow, trampling by animals could expose the warming soil beneath them to the cold air above. 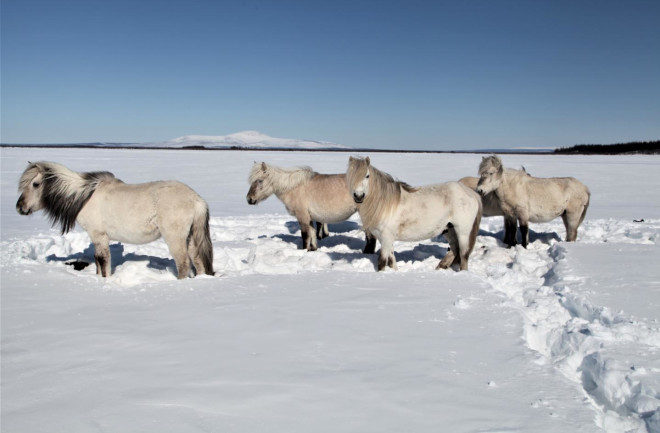 As the Arctic continues to thaw because of global climate change, more and more researchers are looking for ways to stop the irreversible melt. In a paper out Tuesday in Scientific Reports, one research team suggests a new way to keep things cooler: Recruit reindeer.

The Arctic’s hooved residents compact snow as they graze, packing it into a denser, thinner layer. The researchers estimate that thinning the snow layer above the frozen soil, called permafrost, could cut how much it warms by about 44 percent. It’s because the thinner snow layer brings the cold Arctic air that much closer to the soil below.

Permafrost is supposed to be, as its name suggests, permanently frozen. Roughly 8.8 million square miles of the Northern Hemisphere are covered by this layer of ice-bound soil and dirt. But hotter temperatures on Earth are changing the nature of this frozen ground. In unfrozen soil, bacteria can degrade plants and other dead materials in the dirt. The process releases carbon dioxide and methane, which means that, instead of just being a casualty of global warming, permafrost is also contributing to climate change. Without steps to curb the warming soil, half the world’s permafrost could melt by 2100.

Seeking solutions, researchers turned to a park in a small corner of Russia, where it’s possible a large herd of reindeer, bison, horses and other animals are preserving their own swath of permafrost. This Pleistocene Park was established to re-create conditions Earth would have seen in the geological epoch that started about 2.5 million years ago and hosted some of our most recent Ice Ages — and a lot of large herbivores.

Researchers have been watching how trampling herds have impacted soil in the Siberian nature reserve since 1996. And it turns out the hooves of herbivores are great at squashing snow. In the new study, Christian Beer, an ecologist with Universität Hamburg, and his colleagues report that grazer-compacted snow is about half as tall as it was before. Because snow can act as an insulator — and keep warmer ground protected from the colder air just above — the thicker the snow, the more it insulates.

Wait, How Many Animals?

Using snow compaction data from the conservation park and another reindeer herding area in northern Sweden, the team next simulated what the soil temperature would be like if all the permafrost, everywhere, was covered in herds of shuffling herbivores.

This kind of compaction over large stretches of land would take fairly dense herds of hoofed animals — one study site had 1,200 reindeer per square mile — which the authors acknowledge might be hard to achieve. “It may be Utopian to imagine resettling wild animal herds in all the permafrost regions of the Northern Hemisphere,” said Beer, in a press release. “But the results indicate that using fewer animals would still produce a cooling effect.”

If world carbon emissions continue as usual, the permafrost is expected to warm 3.8 degrees Celsius. Half the frozen ground would melt. But if all that space were covered by trodden-down snow, the researchers predict, the land beneath would only warm 2.1 degrees.

The authors didn’t calculate how herbivore-trampling permafrost would affect the carbon it emits. They also acknowledge that, logistically, getting that many reindeer, cows or horses onto the land would be tough, and they’d have to account for other ecosystem impacts of reintroducing the animals in such huge numbers.

That’s why the researchers' next step is understanding how many animals it would take to get some degree of cooling benefit. Dense herds all over the Northern Hemisphere might not be realistic, but maybe something more than what we have now would be enough to meaningfully trample the insulating snow.

“This type of natural manipulation, in ecosystems that are especially relevant for the climate system, has barely been researched to date — but holds tremendous potential,” Beer says.