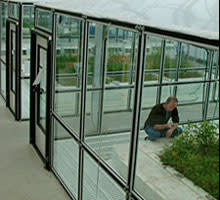 Researchers have found that a one-year temperature spike can decrease the amount of carbon dioxide absorbed by a grassland ecosystem for up to two years. The four-year experiment, conducted at the Desert Research Institute in Nevada, adds a troubling new factor to calculations on how to best cope with global warming.

Grasslands and their soils are considered a major sink for excess atmospheric carbon dioxide. Such natural carbon sponges, if they continue to thrive, could help alleviate the warming effects of manmade CO2 emissions [Science News].

In the experiment, which was described in the journal Nature [subscription required], researchers removed 12 large plots of grass with the underlying six feet of soil and microbes, each taken from the Oklahoma prairie in one piece. The plots were transported to the institute's greenhouses, where the ecosystems were carefully controlled. Half the plots were exposed to normal fluctuations of temperature and rainfall, while the other half were subjected to one year where temperatures were consistently 7 degrees Fahrenheit hotter than usual.

During the hot year, the affected ecosystems responded by taking up far less CO2 than during the normal year. And while the plants recovered their ability to soak up CO2 the following year, the ecosystem as a whole still fell short of normal activity [Christian Science Monitor].

Researchers say the mechanism is two-fold: During the hot year, the grasses took steps to preserve water, which also reduced the amount of carbon dioxide absorbed for photosynthesis. The hot year also caused less decomposition of organic matter in the drier soil, so the following year's burst of decomposition pumped further carbon dioxide into the air. Overall, the grassland plots that experienced the heat wave absorbed and stored just one-third the amount of carbon dioxide that the other plots stored. Researchers say the ecosystem's

response to an extreme event is important because predicted changes in climate involve more than just an average increase in temperature. The future climate is also likely to include an increase in the frequency and intensity of extreme temperatures. Grasslands are relevant because they cover roughly 40 percent of the earth's land surface area [Ars Technica].