Natural and false color views of wildfires burning in California and Oregon alternate in this animation of images captured Aug. 2, 2014 by NASA's Aqua satellite. (Source: NASA) Wildfire activity is really picking up in California and Oregon, thanks to extreme drought, high temperatures and lightning crackling across the region. In California alone, the area burned by wildfire has quadrupled since last Wednesday. The animation above consists of natural and false color satellite images acquired yesterday by NASA's Aqua satellite. In it, I count at least five wildfires. The biggest plume, toward the top, is streaming from a fire in the lightning-started Beaver Complex, which as of this morning had burned about 32,000 acres and was only 10 percent contained, according to Inciweb. The complex consists of the Salt Creek Fire about 20 miles northwest of Medford, and the Oregon Gulch Fire about 15 miles east of Ashland. The latter blaze was discovered on July 31 and spread southeast from the Cascade Siskiyou National Monument into California. The natural-color image in the animation at the top of the post accentuates the smoke streaming off the fires, and what appear to be towering pyrocumulus clouds. These form when intense heating from a wildfire (or a volcanic eruption for that matter) creates air currents that pull water vapor high into the atmosphere. As it cools the water vapor condenses, creating clouds that look very similar to thunderheads. (For more on pyrocumulus clouds, check out this excellent explanation.)

The false color image in the animation up top accentuates areas of active burning, as well as burned over ground. Also visible in the animation are the Coffee Fire (lower left corner); the Little Deer Fire (just south of the Beaver Complex); and the Eiler, Bald and Day fires (toward the lower right corner). As I'm writing this on Sunday afternoon, just those fires alone comprise more than 90,000 acres. And many more are burning in California and the Pacific Northwest. (Click here for a map and list of California's wildfires.) 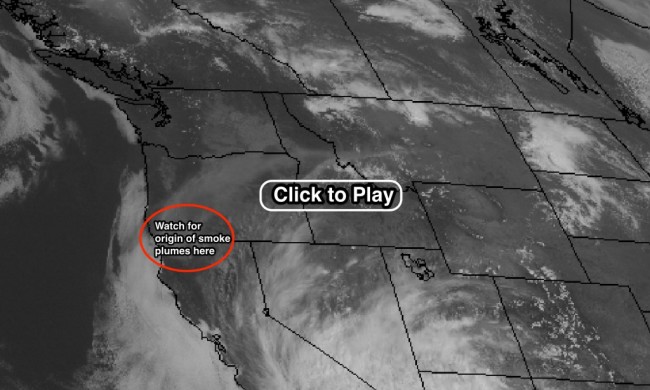 An animation of GOES-West satellite images from Sunday (Aug. 3) shows smoke plumes from California and Oregon wildfires streaming across a wide region. Note the location of fires in this static image and then click the image to play the animation. (Source: NOAA) The wildfires haven't been limited to California and Oregon. Washington State has been hit particularly hard, as was noted in the most report of the U.S. Drought Monitor:

Washington State’s largest wildfire on record, the quarter-million acre Carlton complex—sparked by lightning on July 14—was largely contained by month’s end. Still, the complex of four fires (Stokes, Gold Hikes, French Creek, and the Cougar Flat fires) was enormously destructive while burning through timber, grass, and brush, with more than 300 homes destroyed in the Okanogan County communities of Brewster and Pateros. Following a brief cool spell, intense heat returned across much of the Northwest late in the month. On July 29, daily-record highs in Washington included 107°F in La Crosse and 105°F in Wenatchee. Farther south, moderate to extreme drought (D1 to D3) crept northward in eastern Oregon.

California is, of course, gripped by an historic drought. Time will tell whether the upsurge in wildfire activity we're seeing now will die down or is just the beginning of a particularly grim burning season.

EnvironmentWhy Does It Rain So Much in Spring?
Recommendations From Our Store