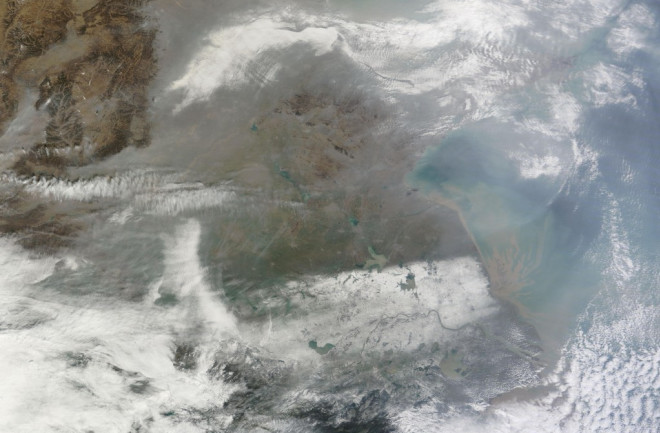 Much of eastern China is visible in this images from NASA's Terra satellite captured on Feb. 20. (Image: NASA EOSDIS) I generated this image of eastern China using NASA's interactive Worldview tool. To my admittedly amateur eyes, it looks like a good deal of this part of the country is shrouded in a gauzy haze. The image was captured by NASA's Terra satellite earlier today. Of course, air pollution has been an ongoing issue in parts of China this year, most especially Beijing, which is at the top center of the image. An air quality monitor maintained at the U.S. Embassy there measured fine particulates (PM2.5) during much of the day on Wednesday at levels considered unhealthy for all persons. But it was not nearly as bad as it has been in recent weeks. On January 10, the reading was literally off the charts, and the haze was so thick the ground could not even be seen in satellite images. Air quality in Shanghai, at the lower right quadrant, was a bit better today than it was in Beijing, with fine particulates at concentrations that are unhealthy for sensitive groups, such as the elderly and those with lung or heart disease, but not for the general population. Concerning Worldview, the tool "shows the entire Earth as it looks 'right now' — or at least as it has looked within the past few hours," as NASA explains it. You can zoom in an out, as well as choose different dates to view. When you've located something you like, you can take a "snapshot" of it and save an image to your hard drive.