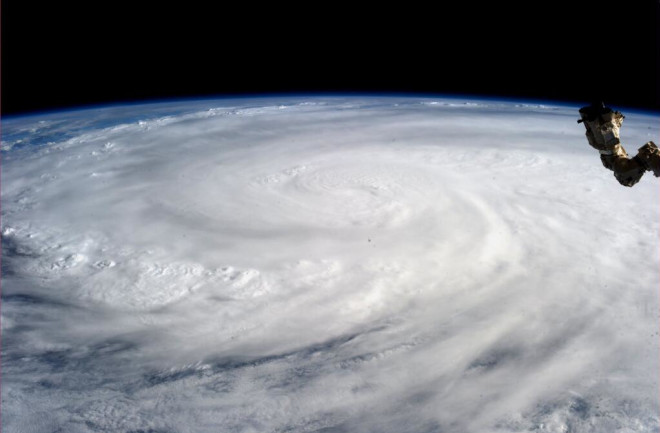 Typhoon Haiyan as photographed by astronaut Karen L. Nyberg on Nov. 9, 2013 from the International Space Station. (Source: Karen L. Nyberg/NASA) How strong was Super Typhoon Haiyan when it tore into the Philippines on Nov. 7? Predictably, I'm afraid, that scientific question has become intensely politicized. Here, for example, is Marc Morano's headline at Climate Depot:

Over at Watts Up With That?, Anthony Watts proclaimed:

Estimates of the death toll are varying wildly right now, from the hundreds to more than 10,000. Regardless of the exact number, I'm sure the friends and family of the many people who perished, and the thousands who have lost their homes, would not at all agree that the storm was "overhyped." Nor would the gentleman quoted in this video:

Click for video "It was like a tornado just passed us, and the tornado lasted for four hours. The hotel was just crumbling. At first it was the ceilings that went off and then the roofs just started flying in all directions, and then the water just started coming..."

There are, in fact, conflicting reports about Haiyan's strength at landfall. Remote sensing by satellites indicated peak wind speeds of 190 to 195 miles per hour, prompting Jeff Masters, director of Meteorology at Weather Underground, to say it was the "strongest tropical cyclone on record to make landfall in world history." Meanwhile, the Philippine Atmospheric, Geophysical and Astronomical Services Administration pegged the storm's peak gusts at 171 miles per hour. We'll have to wait for further scientific analysis to get a better fix on Haiyan's actual strength at landfall. But regardless of the final number, and whether the storm actually was the strongest landfalling tropical cyclone on record, the grim news coming out of the Philippines shows unequivocally that it was devastating. And using the storm to score political points, even as many thousands of Filipinos are in misery, seems unseemly to me — to say the least. The politicization, of course, centers on the question of what role, if any, climate change may have played in the storm. Climate change activists themselves didn't waste time to use the storm for political purposes. Jamie Henn, co-founder and communications director for 350.org, had this to say at the Huffington Post the day after the storm struck:

Carbon dioxide is the steroids that leads to grand-slam storms like Haiyan.

I don't know about you, but that sure sounds to me like an argument for cause and effect. And arguing now, before any scientific analysis has been done, that carbon dioxide led to Haiyan is simply bogus. Plain and simple. My colleague Andrew Freedman at Climate Central got it just right when he addressed the issue of climate change and Typhoon Haiyan in this way:

Hurricane researchers contacted by Climate Central said Haiyan is an example of the type of extreme storm that may become more frequent as the climate continues to warm. But there is more consensus about the stormier future than there is about the present. The researchers also urged caution in attributing Haiyan’s strength to global warming, given the lack of evidence that manmade global warming has had any detectable influence on Western Pacific typhoons, let alone tropical cyclones in general (an umbrella term that includes typhoons and hurricanes).

So for now, can we please call a truce in the climate change wars and just help the Filipinos recover?