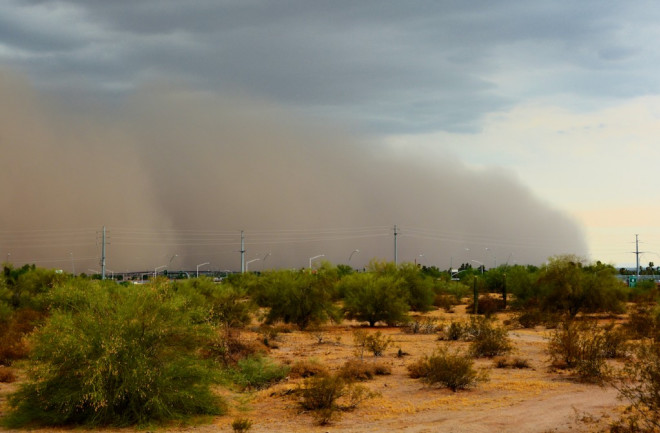 A dust storm bears down on the desert landscape near Phoenix on Friday, July 12. (Image: Courtesy Greg Gorman.) As a thunderstorm approached the Phoenix area last Friday, downdrafts blasting from the base of the storm raised a giant wave of dust from the desert floor and pushed it toward the city. The dramatic event was captured by Greg Gorman in the photo above. (Check out his Flickr page for more of his images of the event.) Dust storms like this are not uncommon in the desert Southwest of the United States. They happen when monsoon season arrives, bringing thunderstorms and their blasting downdrafts. A dust storm like this is often called a "haboob," after the Arabic word haab, which means "wind" or "blow." (Some locals, however, are incensed at the use of this Arabic term. I find that pretty sad.) As the thunderstorm that caused Friday's dust storm approached the greater Phoenix area from the southeast, NEXRAD radar captured its structure. Here's an image of what that looked like:

A view of a thunderstorm's three dimensional structure based on NEXRAD radar data. As the storm approached the Phoenix area on Friday, July 12 it resulted in a dust storm that swept across parts of the city. (Image: Courtesy Jeff Adkins) I first spotted a NEXRAD-derived 3-D image of the storm in a Tweet from Jeff Adkins. There's no denying it — I'm a sucker for imagery like this. So I got in touch with Jeff, and he was kind enough to create a variety of views for me to choose from, using an application from Gibson Ridge Software. In the image, the greenish tones show areas of rain and possible lightning, yellow tones show active thunderstorm activity, and the red is indicative of the most severe parts of the storm, where torrential rains, and frequent, intense lightning strikes are taking place. The thunderstorm was a symptom of the monsoon's arrival. Here's a more synoptic view — a video created from GOES-13 satellite images from July 12 and 13 — that can help you picture just what the monsoon is all about. http://www.youtube.com/watch?v=6Dk9yGWrUQA&feature=youtu.be Click on the animation and watch for clouds blossoming like giant white flowers along an arc extending from Mexico into the western United States and up into the Midwest. To understand that arc of clouds and thunderstorm activity, have a look at this diagram:

As a subtropical ridge of high pressure moves north into the southern tier of the United States, winds blowing into the desert southwest shift, bringing moisture up from the south. (Map: NOAA) During the winter, the prevailing winds across Arizona flow from the west and northwest. But in the summer, a ridge of high pressure moves up from the subtropics. That's the blue "H" in the diagram above. Add in intense heating and the result is a shift in the winds, which now blow from a more southerly direction, as seen in the diagram. Like a giant hose, these winds bring moisture from from the Gulf of California and Gulf of Mexico into the otherwise parched desert region. And the combination of moisture and intense heating can bring on bursts of thunderstorms, interspersed with calmer periods. (For a more detailed explanation, check this out.) It looks like the summer monsoon has begun in earnest in the desert Southwest. So look for dust storms in coming weeks. If I spot images of particularly noteworthy ones, I'll share them here.