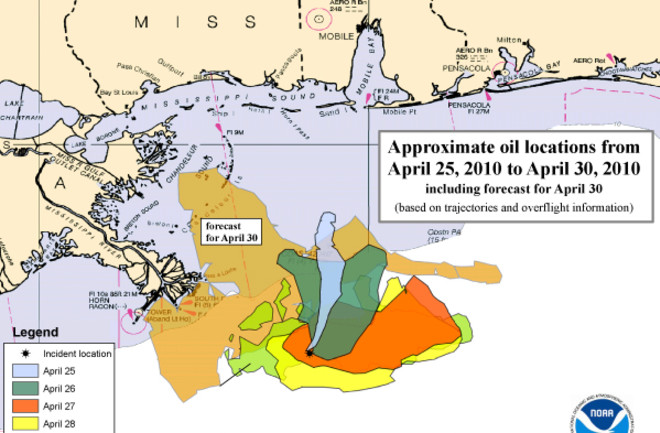 The moment conservationists have been dreading since the Gulf of Mexico oil spill started—that oil making landfall—appears to be upon us. This morning the Coast Guard is flying over the Gulf Coast to check out reports the crude washed ashore overnight, and more reports of oil drifting ashore are coming out of Louisiana.

Crews in boats were patrolling coastal marshes early Friday looking for areas where the oil has flowed in, the Coast Guard said. Storms loomed that could push tide waters higher than normal through the weekend, the National Weather Service warned [AP]

. Homeland Security Secretary Janet Napolitano set up a second base of operations to deal with potential impacts on the Gulf Coast states of Alabama, Mississippi, and Florida. Meanwhile, Louisiana Governor Bobby Jindal has declared a state of emergency, and said:

“Based on current projections, we expect the oil to reach land today at the Pass-A-Loutre Wildlife Management Area. By tomorrow, we expect oil to have reached the Chandeleur Islands and by Saturday, it is expected to reach the Breton Sound. These are important wildlife areas and these next few days are critical” [Nature]

. The city of New Orleans already reeks of a"pungent fuel smell" believed to come from the oil spill, as the Times-Picayune newspaper puts it. With this news, along with yesterday's announcement that the spill could be five times worse than first believed, the Deepwater Horizon disaster is close to becoming historically bad.

The oil slick could become the worst U.S. environmental disaster in decades, threatening to eclipse even the Exxon Valdez in scope. It imperils hundreds of species of fish, birds and other wildlife along the Gulf Coast, one of the world's richest seafood grounds, teeming with shrimp, oysters and other marine life [CBS News]

"It is of grave concern. I am frightened. This is a very, very big thing. And the efforts that are going to be required to do anything about it, especially if it continues on, are just mind-boggling" [AP]

. Responders keep trying to stem the flow, but all the Coast Guard's containment boom and controlled fires, and all of BP's undersea robots, haven't been able to stop the oil leak deep undersea.

Underscoring how acute the situation has become, BP is soliciting ideas and techniques from four other major oil companies — Exxon Mobil, Chevron, Shell and Anadarko [The New York Times]

“To be frank, the offer of help from all quarters is welcome,” said David Nicholas, a BP spokesman [The New York Times]

. Facing a far-reaching catastrophe, today President Obama's administration announced that the plan announced a month ago to expand offshore drilling is going on hiatus, at least until people figure out what went wrong in the Gulf. Meanwhile, the Interior Department says it will commence an immediate safety review of all the rigs and drilling platforms in the area. Our previous posts on the Gulf Oil Spill: 80beats: Uh-Oh: Gulf Oil Spill May Be 5 Times Worse Than Previously Thought 80beats: Coast Guard’s New Plan To Contain Gulf Oil Spill: Light It on Fire 80beats: Sunken Oil Rig Now Leaking Crude; Robots Head to the Rescue 80beats: Ships Race To Contain the Gulf of Mexico Oil SpillImage: NOAA