: After running aground last week on a remote island off the coast of South Africa, a freighter has leaked over 800 tons of fuel oil, coating an estimated 20,000 already-endangered penguins. “The scene at Nightingale [Island] is dreadful as there is an oil slick around the entire island,” said Tristan Conservation Officer Trevor Glass said in a statement. But even worse, authorities fear that the rats from the soybean-toting ship will swim to the island and destroy the bird population. What's the Context: 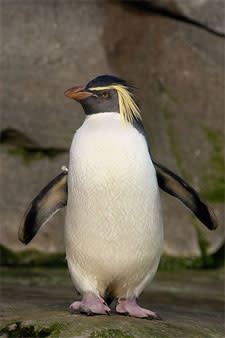 The Future Holds: Though a salvage tug left Cape Town, South Africa, last Thursday, the earliest it will arrive to help remove fuel is this Wednesday. With little to salvage, authorities say that cleanup is now the main task at hand. As Jay Holcomb, the director emeritus of the International Bird Rescue Research Center, told the New York Times, "Many of the birds have been oiled for over a week, which limits their chances of survival."