Greener Farming Methods Can Make As Much Green As Industrial Ones 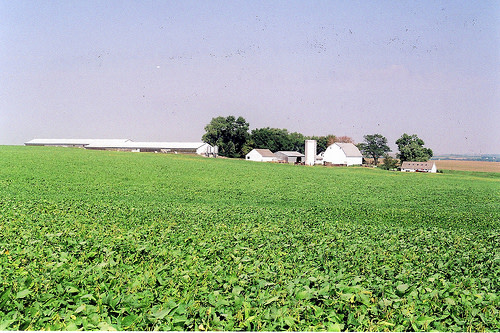 "Integrated pest management" is a mouthful. But the farming method, involving growing multiple crops together and playing their strengths and weaknesses off each other, could be key to using fewer chemicals to grow more food. Though it's been discussed for decades, a set of recent experiments reported in the journal PLOS ONE

puts more weight behind it: using this style of farming with moderate use of fertilizers and pesticides, the study found, is just as productive as industrial agriculture while requiring fewer chemicals. On about 20 acres of Iowa farmland over eight years, agronomists tested out different methods for raising crops. One field was grown the industrial way: corn and soybeans were planted in alternate years and given the customary dosages of fertilizer and herbicides. In two other fields, crops were grown in three- or four-year rotations, adding oats and either alfalfa or red clover to the mix. With more species around, it was harder for weeds to take hold, reducing the need for herbicides; when the researchers did apply the chemicals, they did so on an as-needed basis, choosing formulas targeted to the particular weeds they saw and applying them to specific rows rather than spraying whole fields. The alfalfa and red clover naturally fertilized the soil, and the researchers spread manure on the fields, as well. Like herbicides, synthetic fertilizer was applied only when necessary. The fields with more diverse rotations used eight times less herbicide than the conventional fields, and needed 86% less synthetic fertilizer, while yielding just as much biomass. Though this hybrid is more labor-intensive than industrial farming---monitoring crops to see when to apply chemicals takes work---the savings on fertilizer and herbicides can make up for those added labor costs, John Reganold, a soil scientist from Washington State University who was not involved in the study, told Brandom Keim of Wired

. With integrated pest management, then, perhaps farmers can go green while staying in the black.