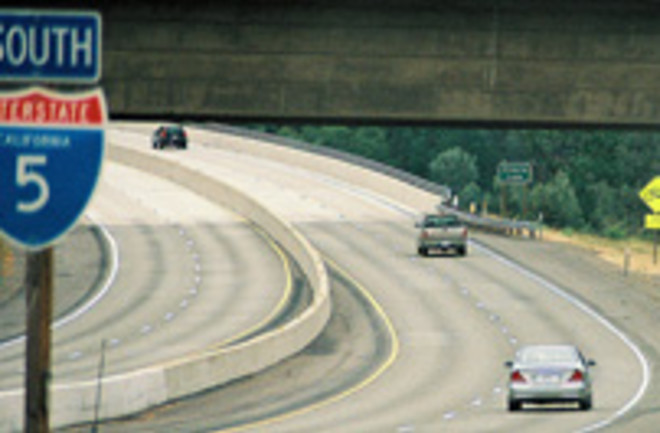 The governors of Washington, Oregon, and California are considering plans for a “green freeway” that would see alternative fueling stations implemented along Interstate 5 from Canada to Mexico. As the plan stands, motorists eventually would be able to pull off at I-5 rest stops for more than a cup of coffee and roadside relief: They also would be able to charge, or swap out, their electric-vehicle batteries or fill their tanks with biodiesel, ethanol, hydrogen or compressed natural gas [The Seattle Times]. Opponents to the plan say it would compete with private businesses, but Jeff Doyle from Washington’s Department of Transportation said the state wouldn't want alternative-fuel stations to disrupt rest-area traffic, so contract companies would have to provide small, low-profile setups. Doyle added that rest-stop fueling sites would be self-service and likely to have little or no on-site staffing [The Seattle Times].

While the plan is facing many rounds of approval before it can become a reality, it does fit into the new administration's push for green jobs and it would most likely qualify for stimulus money that would get the project going [

EcoGeek]. If approved, the green highway could begin as early as this summer, and would mark the first time US drivers could travel a long stretch of freeway with easy access to alternative fuel…. The fuelling stations and battery swap-out docks would be the first businesses allowed by US west coast states to operate at rest stops, Doyle said. To help companies with their initial costs, they would not be charged rent until they started turning a profit, he said [The Seattle Times]. A plan announced in 2003 for a similar project in California, however, is already behind deadline and has now been called overly "optimistic." Shortly after taking office, Governor Arnold Schwarzenegger promised a "hydrogen highway" that would provide all California drivers with access to hydrogen fuel by 2010, a plan that now looks to be a failure. "Vision 2010" called for 150 to 200 fueling stations to be opened along the state's highways, approximately 20 miles apart. But the program has fallen short of expectations. With less than 10 months until the end of the decade, 24 hydrogen fueling stations are operating in California, most of them near Los Angeles…. The state's hydrogen-highway experience points to a fundamental question confronting any effort to build an alternative car market, be it powered by hydrogen or electricity: What comes first, the vehicle or the infrastructure? [The New York Times]. Related Content: 80beats: Obama Talks up Clean Energy, While Republican Response Nettles Scientists 80beats: Electric Car Startup Tesla Motors Faces Financial Trouble & High Hurdles 80beats: Chrysler Jumps Into Electric Car Race With Three New Vehicles 80beats: California Announces Ambitious Plan to Cut Greenhouse Gases DISCOVER: Top 100 Stories of 2008 #1: The Post-Oil Era Begins