Grandma, What Long Claws You Have

Humans and T. Rex missed each other by many millions of years, but a five-inch-long fossil proves that placental mammals thrived among dinosaurs far longer than anyone knew. A team led by Zhexi Luo, a paleontologist at the Carnegie Museum in Pittsburgh, unearthed a 125-million-year-old mouselike animal—dubbed Eomaia, or "dawn mother"—from a fossil lake bed in northeastern China. Minute patterns in the teeth, bones, and fur, exquisitely preserved by the fine shale at this site, clearly identify the creature as an early member of Eutheria, the group of placentals that includes people as well as almost all modern mammals. This proto-mouse shows that the ancestor of placental mammals appeared 40 million years earlier than previously believed.

"A placenta allows a fetus to grow a longer time in the womb, which is critical for the better development of brains and other structures that allowed Eutherians to diversify so successfully after the dinosaurs disappeared 65 million years ago," says Luo. Eomaia's anatomy hints at what mammalian life was like back in the Mesozoic Era. The creature's long, curved fingers and sharp claws suggest that Eomaia was highly skilled at climbing trees and shrubs, an adaptive development that most scientists thought happened tens of millions of years later. The new fossils belie the popular image of scarce mammals hiding from marauding velociraptors. Eomaia probably climbed not just to avoid predators, Luo says, but to escape competition from its fellow furries. 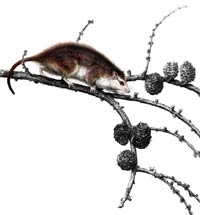 Eomaia, the earliest known placental mammal, had two layers of fur—an undercoat covered by longer guard hairs—just like that of many modern dogs. Photograph courtesy of Carnegie Museum