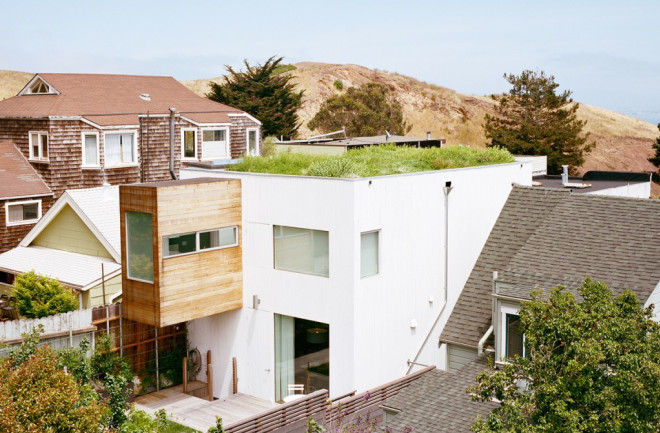 (This post originally appeared in the online science magazine Hawkmoth. Follow @HawkmothMag to discover more of their work.)

There are good reasons to think green when it comes to urban rooftops: planting gardens called “green roofs” atop skyscrapers benefits cities environmentally, economically, aesthetically, educationally, and psychologically. But what about thinking blue? Although newer and lesser known than green roofs, blue roofs are another nature-mimicking tool to improve our cities. More specifically, blue roofs help our urban watersheds by rethinking rainfall.

Blue roofs catch rain. They do this to temporarily collect the water before it reaches our sewer systems, so that it has time and space to either a) filter through an artificially constructed wetland (modeled after nature’s own water filter) or b) irrigate the surrounding landscape. In this way, blue roofs drastically reduce the amount of untreated water that would otherwise flow down our gutters, into our storm drains, and out to sea.

A blue roof cross section. (Credit: Hyphae Design Laboratory) In undeveloped and rural areas, rainfall is absorbed by the landscape. It filters through a mesh of plant roots, rocks, and a variety of soil types. The natural hydrologic cycle keeps the water clean. But in paved or impervious environments, such as our densely built urban environments where pollutants are rampant, runoff is a huge problem. Simply put, would you rather drink the water that collects at the base of a natural creek, or at the base of a parking garage?

When rain moves through a city, it flows quickly over impenetrable sidewalks, roadways, parking lots, and rooftops, flowing into our sewer systems after picking up contaminants along the way. Designed to filter both waste and runoff, sewer systems overflow and can’t filter correctly. Untreated sewage spills into the public waterways (i.e. our drinking water), and slowly makes its way to surrounding streams, rivers, and oceans. Not only is this a health risk for the public, it’s a health risk for the environment. But what if we stopped wasting the extra rain, and designed our cities so that this excess stormwater worked for us? How can we rethink infrastructure, whether we design it to be more “green” or more “blue, so that our streets, parks, and plazas not only benefit the sewer system, but also make our cities more livable?

The nonprofit Osborne Association and New York Department of Environmental Protection's (DEP) combined blue and green roof. (Credit: Osborne Association) Redesigning roofs is a potential solution. Like wetlands, environmentally designed roofs can provide water purification, flood protection, and habitat. They catch the rain first, after all. By catching and storing rain through a series of living detention systems (i.e constructed wetlands full of plants, gravel, and sand), blue roofs can better filter and use the rain that falls on them, reducing the burden on our aging sewer facilities. Imagine you are a pure rainwater droplet, landing on an urban rooftop. You flow down the roof’s grade, picking up tar and dirt, then drain into the gutter system. In the gutter, you pick up more dirt, and perhaps some flecks of lead paint. Rushing down the gutters to the street, you then roll through oil, grease, decades of car exhaust, and other toxic chemicals on your way to the sewer system and eventually, a water treatment plant, ill-equipped to filter you clean. What have you seen on the sidewalk that you would not want your drinking water to touch? Probably quite a bit.

Now imagine you are a rainwater droplet landing on a blue roof. First you hit a wetland plant, rolling down its leaves to a highway of roots and soils. You filter through slowly, as both the plant and the soil actively use you. Afterward, some of your droplet is already missing – lost to evaporation and absorption.

Green and blue abut each other on the Osborne Association and DEP's combo roof in the South Bronx. (Credit: Osborne Association) What remains of you filters down the roof to the gutter system. Here you drop to a landscaped area below, yet again falling into a plant. As you roll down to a new highway of roots and soil types, most of your water is gone – every beneficial bit of your droplet has been used. What remains continues to make its way to the sewer system, much cleaner than you would have been, had you fallen on a city street. Blue roofs can sink, slow, reuse, and move water: the four techniques of urban watershed management. They can be installed on most types of commercial and industrial structures, as well as single family homes and garages. They are also less expensive than green roofs, which also work to reduce the stress on sewer systems during heavy storms and wet seasons. So whether it’s greening or blueing our infrastructure, practices that mimic natural systems to manage urban issues are well on their way.

The forgotten landscapes of our roofs can be utilized with greater purpose. One example of a blue roof project today is the 21st Street Project in San Francisco. The design firm I work with, Hyphae Design Laboratory, works closely with the guidelines of San Francisco’s Sewer Improvement Program, to help brainstorm solutions to the city’s sewer system challenges. Hyphae Design Laboratory (which derives its name from “hyphae,” the fine web-like tubes making up the body of a fungus, responsible for symbiotically sharing nutrients between soil and plants) is a Bay Area based consulting, design, and engineering firm. Our 21st Street Project is a single family home with two detached garages and landscaping in San Francisco. Right now, the property site is half impenetrable, non-filtering concrete, and half high-filtering plants (watch this short animated video to see the contrast). Today, stormwater runoff from the 21st Street property flows down to the sewer system below, unfiltered or not.

Hyphae Design's conceptual plan for the Harmony Building in Louisville, Kentucky. Water from the blue roof is channeled and filtered down through green roofs and ultimately reintroduced into the local aquifer. (Credit: Hyphae Designs) Our design plan for this 5,700 square foot site is to increase the high-filtering area from half to 61 percent. Rainwater will be harvested from simple, green, and blue rooftops throughout the entire property, to be used for landscaping and indoor non-drinking water reuse, via an 8,600-gallon tank. The system itself will offset close to 100 percent of its non-drinking (or non-potable) indoor demand every year, for water needs such as filling the toilet bowl or running a load of laundry. Today, less than half an inch of rain can overload the average US sewer system. Water savings add up quickly, and cities are desperate for solutions. If blue roofs could offset close to 100 percent of the 21st Street home’s non-potable water demands, imagine what they could do for an entire city! The more we continue to mimic natural systems, the cleaner and more livable our urban landscapes will be. Nature knows what works. It’s up to us to mimic the blueprints already living around us.