A clear-eyed look at the magnitude of global warming problem—and the cost in getting rid of it. 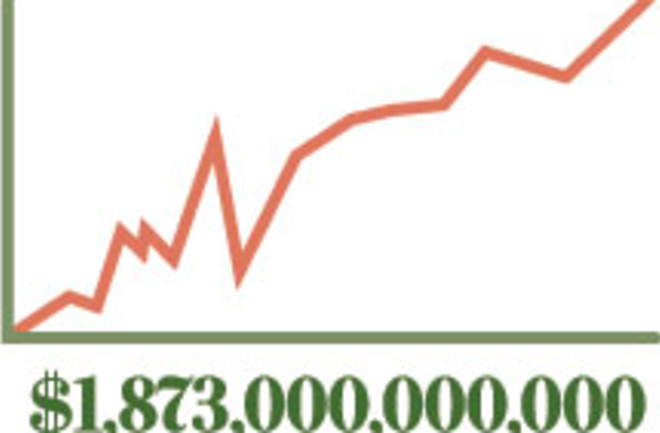 The projected cost of climate change worldwide by 2100, if we take a “business as usual” approach, according to a report published by the Natural Resources Defense Council. Hurricane damage, real estate losses due to sea level rise, and expenses associated with drought all contribute.

The amount of solar heat, in Btu, that hits Earth’s surface every second. One plan for deflecting some of the heat: launching stacks of 800,000 reflective disks into orbit every 5 minutes for 10 years.

The quantity of human-generated carbon dioxide, in billions of tons, that the oceans have absorbed. Studies show the oceans are reaching their sequestering limits, so climate researcher Wallace Broecker advocates building 60 million 50-foot-high towers to capture all of the world’s carbon emissions, then pumping that carbon into saline aquifers.

Cost: a rise in energy prices of about 15-20 percent

The average drop in global temperatures after Mount Pinatubo in the Philippines blew its top in 1991, spewing 20 million tons of sun-blocking sulfur dioxide. Atmospheric chemist Paul Crutzen, a 1995 Nobel laureate, believes shooting 5.3 million tons of sulfur dioxide into the atmosphere annually could offset a doubling of carbon emission levels.

The amount that worldwide rainfall would be reduced by using space mirrors or sulfur particles to mitigate global warming, according to a paper published in Proceedings of the National Academy of Sciences. This could cause droughts around the world. Past studies have found that CO2 pumped underground makes aquifers more acidic, potentially creating leaks. Clearly, big solutions can come with big consequences.