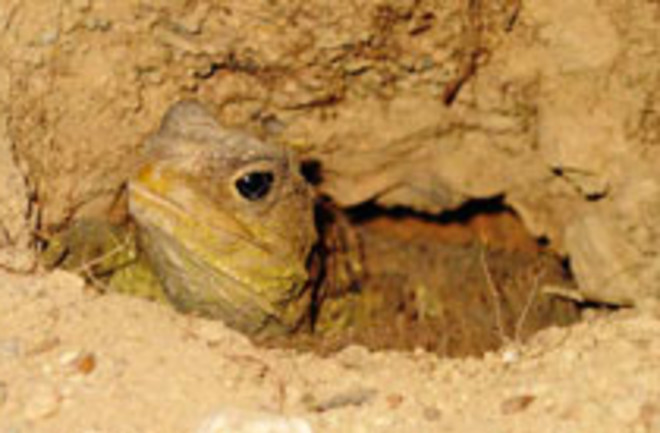 On a scattering of small islands off the north coast of New Zealand, members of an ancient reptile species are currently scuttling around, oblivious to the impending doom that researchers predict for them. Like many reptiles, the tuatara's sex is determined by the nest temperature while the embryo is developing; now researchers have used computer modeling to determine that global warming could raise island temperatures to the extent that the nests will produce only male hatchlings by 2085. As temperatures tick upwards,

the male tuatara will be increasingly desperate and dateless [Australian Broadcasting Corporation].

The study, which was published in Proceedings of the Royal Society B [subscription required], could be the model for studies of lizards and marine turtles with similar reproductive systems.

“Since the mid 1990s, people have been talking about the vulnerability of reptiles to climate change because they have temperature-dependent sex determination. But no one has been able to model it in this type of complexity before,” says research leader Nicola Mitchell of the University of Western Australia in Perth [Nature News].

are the only surviving members of the Sphenodontian family, which roamed the Earth about 200 million years ago [LiveScience].

The tuataras survived other violent climate upheavals, but researchers say that in previous eras the species had a larger range and could relocate to areas with better climates when times got tough. Now that the tuataras are confined to a series of small islands they would need human assistance to relocate. But researchers did come up with another solution, suggesting

that the tuataras could be saved in their natural habitat if conservationists provided nest sites with artificial shade once the embryos have started to develop. “Tuatara are ancient animals. Their ancestors were scurrying around the feet of dinosaurs. It would be a great shame to lose them,” Michael Kearney, of the University of Melbourne, said [The Times].