Global, Tragic Irony: That Which Saves Us From Heat Is Making Our Planet Hotter 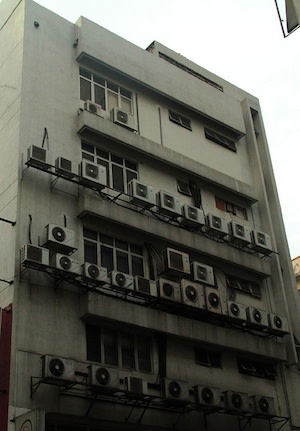 As the summer heats up

, air conditioners are being cranked to full blast. Once upon a time---that is, until the 1980s

---the coolant gasses in these machines, which leaked into the atmosphere after units were junked, were a major threat to the ozone layer. Now manufacturers have replaced them with ozone-friendly versions. But the new coolants are still potent greenhouse gasses. In a New York Times article

, Elisabeth Rosenthal and Andrew W. Lehren describe how air conditioner use is increasing, and why this could spell trouble for climate change.

The oldest CFC coolants, which are highly damaging to the ozone layer, have been largely eliminated from use; and the newest ones, used widely in industrialized nations, have little or no effect on it. But these gases have an impact the ozone treaty largely ignores. Pound for pound, they contribute to global warming thousands of times more than does carbon dioxide, the standard greenhouse gas. The leading scientists in the field have just calculated that if all the equipment entering the world market uses the newest gases currently employed in air-conditioners, up to 27 percent of all global warming will be attributable to those gases by 2050.

As developing countries continue to adopt air conditioning and refrigeration, the greenhouse gases will keep building up. Although the United States is urging other nations to stop installing air conditioners that use these gases, alternative coolants that would neither damage the ozone layer nor contribute to global warming are not yet available. Possible solutions are in development, but the NYT piece explains why many of them have stalled.