Klosneuvirus' genome allows it a greater degree of autonomy than many of its viral relatives. 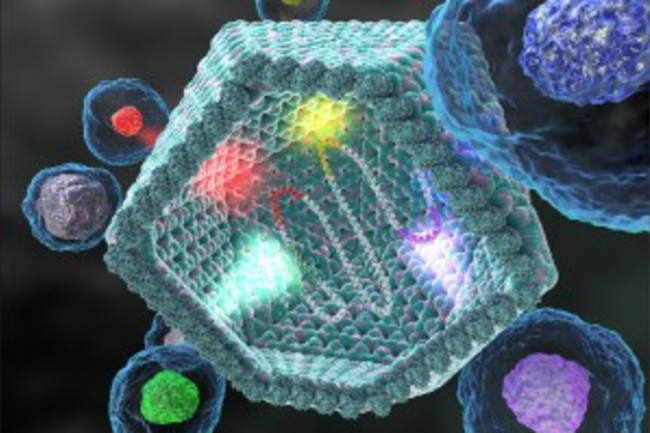 In most biology textbooks, there’s a clear separation between the three domains of cellular organisms — Bacteria, Archaea, and Eukaryotes — and viruses. This fault line is also typically accepted as the divider between life and non-life: Since viruses rely on host machinery to enact metabolic transformations and to replicate, they are not self-sufficient, and generally not considered living entities.

But several discoveries of giant viruses over the last decade have blurred this distinction. Some viruses are even larger and contain more genes than typical microbes like E. coli. Ultra-small bacteria detected in filtered groundwater from Rifle, Colorado are moving the goalposts from the opposite end, leading to a virus-microbe continuum in which distinguishing one from the other isn’t so straightforward. Among the alluring interpretations: Giant viruses could be indicative of a fourth domain of life.

A recent study led by Frederik Schulz at the Department of Energy’s Joint Genome Institute blurs the virus-microbe line even further. While assembling a metagenome from sewage sludge in Klosterneuburg, Austria, Schulz found several genes that all mapped back to the same unknown virus, genes that until now have only been associated with free-living cells.

The particle — named Klosneuvirus — is still a virus, given its other genes and outer coat, but its 1.57 million-base genome allows a greater degree of autonomy than many of its viral relatives. Most notably, they have a relatively complete complement of protein-making machinery, which would reduce the dependence on host cells to do their bidding. For example, most viruses lack aminoacyl tRNA synthetase enzymes, which shuttle amino acids onto transfer RNA molecules; these in turn make their way to the ribosome, dropping off their cargo to build proteins from the chains of amino acids. While some previously discovered giant viruses have seven of the 20 aminoacyl tRNA synthetases, Klosneuvirus has 19, making it almost entirely independent of host involvement in protein synthesis. (It’s also worth noting that autonomy is not a requirement for cellular life, either: many microbes are “auxotrophic,” meaning they depend on external input of organics — often amino acids — in order to survive.)

So could this sophisticated, rule-breaking giant virus indeed be a sign of the mythical fourth domain? To find out, the team compared Klosneuvirus’s aminoacyl tRNA synthetase sequences with other forms of the enzymes across the tree of life. The results were all over the place, with each synthetase showing closest similarity to a different organism (mostly algae). In the ever hyperbolic language of scientific journalese, Schulz notes that “these findings are incompatible with the fourth domain hypothesis … and instead imply piecemeal acquisition of these genes by giant viruses.” The synthetases don’t seem to have evolved together, from the same branch point and within the same organism; rather, they were scooped up by an opportunisitc virus and incorporated into an increasingly mature metabolic network.

As suggested by previous revelations of giant viruses, Klosneuvirus is likely just the beginning of a more thorough reconfiguration of the tree of life. After the intriguing result from the sewage treatment plant in Austria, Schulz looked for genomes of similar viruses, lurking in previously obtained metagenomes from around the world. He found three more — enough to propose a new subfamily, the Klosneuvirinae — the latest links in the chain connecting viruses and the three domains of cellular life.