Geology: How the West Was Formed 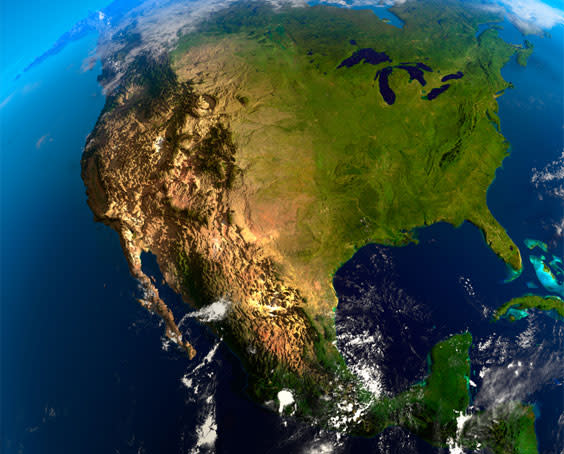 The American West was wild, a messy jumble of land grabbing. Some early movers and shakers were shredded to bits, while others were just buried, never to be seen again.

We are, of course, talking about plate tectonics. Earlier research suggested the western edge of the North American continent was formed by the conveyor belt-like movement eastward of a single oceanic plate called the Farallon Plate. But an alternative explanation

published today in Nature suggests a far more complicated mash-up created North America’s mountainous west, involving at least two additional plates. From Alaska to Mexico, the western quarter of the continent is made up of dozens of pieces of crust added to the landmass over the last 200 million years. The mechanism behind this “jigsaw” formation was unclear, but it was widely accepted that the dense Farallon Plate pushed the blocks into the continent as it subducted eastward, sinking into the mantle to form a slab beneath the lighter continental mass. Researchers put this commonly accepted theory to the test using a kind of tomography that creates images from earthquake waves penetrating deep into Earth’s mantle. Slabs created by subducted oceanic plates can be identified by their faster-than-average seismic wave velocities, offering a glimpse into the planet’s ancient geology. The new tomographic images revealed today indicate not one but three major mantle slabs about 600 to 1100 miles under the planet’s surface. Unlike the previous conveyor belt image of the Farallon Plate continuously subducting eastward, the new research suggests that the continent’s western quarter was formed partly by two previously unknown plates, which the authors named Angayucham and Mezcalera. The newly discovered plates may have underlain long-gone oceans, and both subducted westward beneath the Farallon Plate, creating a hook-shaped slab.

Two potential plate scenarios for North America’s Cordilleran assembly. a. The previously proposed plate configuration (corresponding to 80 million years ago). b. Sigloch and Mihalynuk’s newly proposed scenario (corresponding to 140 million years ago). The grey outlines show the side views of the left section of the plate configurations. Illustration courtesy of Nature News & Views. Instead of the Farallon pushing pieces of crust onto the North American landmass as it subducted eastward, the new research suggests material from all three plates was scraped off during subduction to the west and then to the east. The crust deformed as new material crunched into it; this could explain the jigsaw-like composition of the continent’s west. Subduction polarity switches or flips, such as the westward subduction of the Angayucham and Mezcalera plates followed by the eastward subduction of the Farallon Plate over the same area, are not uncommon in plate tectonics. The new data helps explain western North America’s puzzle of crustal blocks, and could suggest new theories for plate movement even further afield: commenting on today’s paper in Nature’s News & Views, Saskia Goes of the Imperial College London asked whether the newly discovered plates’ westward subduction, tugging North America towards what is now the Pacific Ocean, might have facilitated the opening of the Central Atlantic in the same time period. Image courtesy Anton Balazh/Shutterstock