From the Revkin Interview: The Earthquake Threat to Oregon 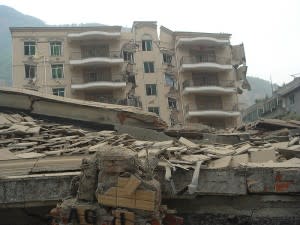 While there was much I liked about my Point of Inquiry interview with Andy Revkin, perhaps nothing was more striking than his direct analogy between the massively deadly 2008 Sichuan earthquake, in China, and what is likely to happen someday in Oregon. I just couldn't believe what I was hearing from him:

In Oregon...where there's a known, extraordinary seismic risk, cities and communities are still not doing much to gird the buildings that matter most, like schools, to make them less likely to fall down and kill thousands of kids and teachers....essentially what you saw in Sichuan province, almost unavoidably will be seen in lots of places in Oregon, where there's that extraordinary fault offshore, the Cascadia fault, that will generate an extraordinary earthquake, most likely in this century, pretty plausibly in the next few decades, if not tomorrow--that will destroy 1,200 schools. The schools are listed, they've been studied, we know where they are, the ones that are very likely or certain to fall down when that quake hits. If my kids were in one of those schools, I'd be pretty energized.

Revkin goes on to discuss why we tend to ignore risks like these, even though there is no possible rational justification for it....you can listen here

. The section begins around minute 23:30. And don't forget to subscribe to Point of Inquiry on iTunes

! Meanwhile, to jon a discussion that has begun about the show, zip over here