From Antarctica to the Moons of Jupiter

Subglacial ecosystems on the frozen continent clue us in to what life may be like in the outer solar system. 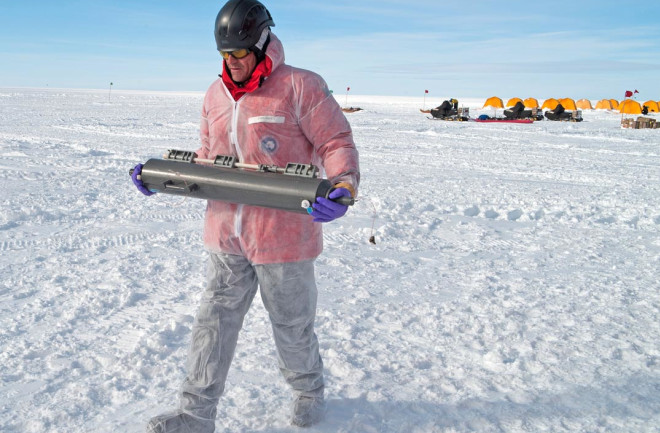 Understanding subglacial lakes could set the stage for uncovering life elsewhere, specifically on icy moons in the outer solar system.

Model of Europa's interior. The moon is thought to have a metallic core surrounded by a rocky interior, and then a global ocean on top of that, surrounded by a shell of water ice. | NASA

Europa, which orbits Jupiter, and Enceladus, found around Saturn, harbor oceans of water beneath an outer shell of miles-thick ice. This geographic blueprint, like the one found around subglacial lakes in Antarctica, sandwiches an ocean between ice above and a rocky core below. It provides a compelling habitat for life, says John Priscu, a lake biologist at Montana State University.

Life requires fuel and something to burn it with; recently found bacterial ecosystems in Antarctica’s Lake Whillans probably use pyrite and other sulfur- and iron-containing minerals on the muddy bottom as fuel – and burn it, metabolically, with oxygen that escapes from air bubbles in the ice sheet. On Europa, fuel may also come from minerals on the rocky bottom, while oxidizing power comes from sulfate and other oxygen-rich compounds that are likely formed by interplanetary radiation acting on chemicals in the icy shell.

(Read more about the search for life in Lake Whillans.)

Remote spectrometry from passing space probes has already documented these sulfur compounds in Europa’s ice, says Priscu, who is funded by NASA to study possible scenarios for life on Europa. He estimates that this energy source could have fed up to 10 trillion tons of living cells over the course of the moon’s history.

All of this remains conjecture, of course. But the discovery of abundant life in Lake Whillans provides a proof of concept that could eventually help justify the expense of sending a space probe able to land on Europa and drill into its ice. Studying the ecosystems beneath Antarctica’s ice could provide important insights into what sensors the probe would need to carry, and how sensitive they would need to be to detect chemical signs of life.