A paper published this week in Science reviews what we know about the water quality impacts of shale gas development and hydraulic fracturing. And the conclusion is… still not that much. This despite the fact that “fracking,” as it is commonly called, has been in play since the 1940s – for nearly 80 years – to extract hard-to-reach natural gas deposits. 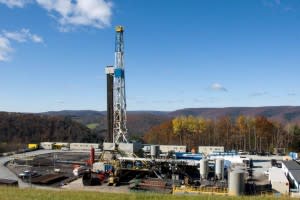 A hydraulic fracking well. Photo by Susan Brantley/Science. In their paper, Radisav Vidic, a professor of civil and environmental engineering at the University of Pittsburgh, and his colleagues focus on the 95,000-square-mile Marcellus shale-gas deposit that underlies much of Pennsylvania and West Virginia. Extraction there ramped up around 2005. Fracking technology improvements that accommodate different geologies, including shale and tightly bound sand formations, have boosted natural gas production from these unconventional sources from nearly zero percent of all U.S. natural gas in 1990 to 30 percent in 2011. Fracking breaks through these different and difficult underground landscapes through brute force, but also with the help of chemicals that are designed to keep rock fractures open and wells clean and clear of bacteria, salts, metals and more. It is these chemicals, many of which do not have to be identified because they are proprietary, that anti-fracking proponents have flagged as threats to water quality. According to Vidic’s paper, “From 2005 to 2009, about 750 chemicals and other components were used in hydraulic fracturing, ranging from harmless components including coffee grounds or walnut hulls, to 29 components that may be hazardous if introduced into the water supply.” The concern is two-fold: First of all some of these gas wells bypass underground drinking water reservoirs and the fear is that fracking fluids may leak into groundwater wells – which more than 40 million Americans use as their primary source of drinking water. Secondly, these chemicals resurface and ultimately end up in toxic pools that, just like mining tailing ponds, if not managed properly could leak into surface waters. Beyond fracking chemicals, there is the gas itself. It is possible that methane, the main element of natural gas, can seep out of natural gas wells into drinking water wells when the seals on the gas wells fail. The methane itself is not considered a health hazard, but can reduce oxygen and that it turn can increase the solubility of arsenic and other potentially harmful substances. Or in rare cases it can cause explosions. Un-identified chemicals and methane-related problems with drinking water are scary prospects, but in reality, there have been few reported cases of either related to fracking. Vidic and his colleagues observed that out of 6,466 wells in Pennsylvania, there had been 219 Department of Environmental Protection violations, many of them “minor.” A study of 60 drinking water wells showed higher than normal methane concentrations when the wells were within a kilometer of active shale natural gas wells, but it has yet to be determined if the source of methane is from the mining operations or if it is naturally occurring. And of the more than 1 million hydraulic fracturing operations that this country has seen, there has been only one reported case of groundwater pollution from fracturing chemicals being injected directly into an aquifer, according to Vidic. He concludes that in the cases of well failure and leakage of fracking fluids that could eventually lead to groundwater pollution, most are quickly mitigated. But he also notes that there have been substantial obstacles for investigating the environmental impacts of fracking – including corporate confidentiality, accelerated extraction and trying to calculate the cumulative effects of several wells concentrated in a small area. The EPA is working on a report related to the transport of fracking fluids, a large percent of which can go unrecovered and get lost in an underground maze of fissures and groundwater pathways. For the “produced” water that does make its way to the surface:

“There is a need for comprehensive risk assessment and regulatory oversight for spills and other accidental discharges of wastewater to the environment,” writes Vidic and his colleagues. “…the need to find alternative management strategies for this wastewater will likely intensify. Now is the time to work on these issues in order to avoid an adverse environmental legacy similar to that from abandoned coal mine discharges in Pennsylvania.”

Read more about the Marcellus shale gas rush (and see a helpful illustration of a fracking well) at National Geographic News.