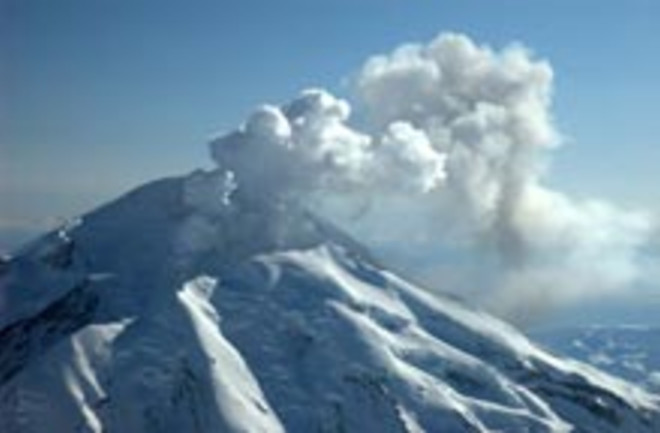 The Alaskan volcano Mount Redoubt erupted last night with four large explosions, sending an plume of ash 50,000 feet into the air, the Alaska Volcano Observatory reported. The volcano lies only 100 miles southwest of Anchorage, Alaska’s largest city, but geologists say that current wind patterns are likely to carry the ash cloud to the north. “It looks like (Anchorage) might dodge the bullet,” Alaska Volcano Observatory geophysicist Peter Cervelli said [Anchorage Daily News]. Mudflows are also possible on nearby rivers.

The 10,200-foot Mount Redoubt last erupted during a four-month period from 1989-90…. Alaska volcanos typically explode and shoot ash upward, sometimes to 50,000 feet, high into the jet stream. An eruption of Redoubt on Dec. 15, 1989, sent ash 150 miles away into the path of a KLM jet, stopping its engines. The jet dropped more than two miles before the crew was able to restart engines and land safely at Anchorage [Fox News]. This time, Anchorage airport officials say they’ve canceled some flights, but have no immediate plans to close the airport.

The volcano has been restless since late January, when vulcanologists warned that an eruption could take place at any time. Yesterday, the volcano watchers saw an uptick in seismic activity that suggested an imminent eruption: Over one 10-minute span seismometers near the volcano’s summit recorded 26 discrete earthquakes, which might reflect the upward movement of magma or gas “breaking rock,” AVO geophysicist Rick Wessel said [Anchorage Daily News].

UPDATE at 3:45 p.m. EST: The first news reports didn’t catch it, but Mount Redoubt erupted a fifth time early this morning, around 4:30 a.m. Alaska time. More eruptions are possible today or in the coming weeks. Chris Waythomas, a geologist with the U.S. Geological Survey, reminds the public that the last spurt of eruptions took four months to play out, and says the current activity may be something of a repeat. “It looks very similar to 1989-90,” Waythomas said. “We anticipate activity will go on for some days, weeks, and maybe months” [Los Angeles Times].