A third of all food produced is lost or wasted. Here are some strategies to waste less food in your home. 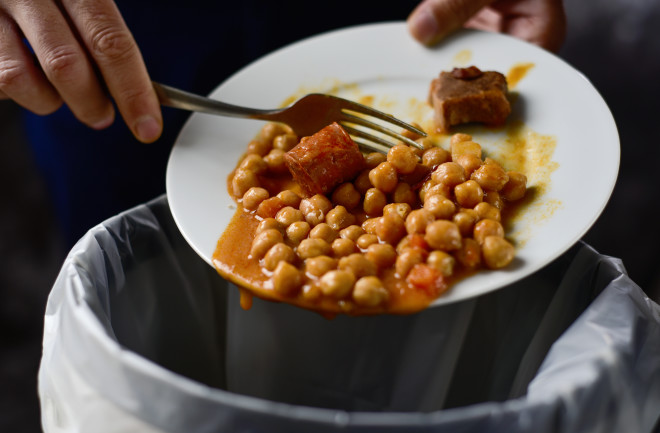 Food waste isn’t the most exciting topic. But listen up — it’s probably costing you, and our planet, a lot.

On a global scale, the burden of food waste is enormous. One-third of all food produced in the world ends up as waste. The amount of waste is equivalent to each person on the planet throwing away around 500 calories every day, according to a recent study.

Research has found that the younger or wealthier you are, the more food you tend to toss. In America, the average household loses around $1,866 per year on food waste. Another estimate suggested that the typical American throws away about a pound of food every day.

Simply put, that’s a lot of food being sent to landfills, where it rots and releases damaging greenhouse gases into our atmosphere. Wasted and lost food accounts for roughly 8 percent of greenhouse gas emissions attributed to human activity every year, according to a U.N. estimate.

But the good news is that we can all do our part in minimizing food waste. All we have to do is throw away less food.

Here are some easy tips you can implement to reduce food waste and help the planet. By no means is this the definitive guide to cutting food waste. But it's a start.

Much of our food waste can be attributed to confusion over food date labels. Many people assume that “sell by” or “best by” labels indicate a point in time when a food has become unsafe to eat. But that’s far from the truth.

Date labels represent when a food has passed its point of peak freshness or quality. You can safely consume many foods — from dairy and baked goods to canned vegetables and even fresh meat — after the stamped date.

A better way to determine whether food has spoiled is to use your use your eyes, nose and fingers for clues. If food smells, looks and feels as it should, it’s probably still safe to eat. Not everyone is a natural when it comes to judging food spoilage based on sensory cues, so if you need a little help in this area, refer to this guide.

It may sound obvious, but meal planning will help you cut down on food waste. Before you go to the grocery store, think about the meals and snacks you’ll eat that week. Make a shopping list that includes the ingredients you’re missing — and check your fridge and pantry to make sure you’re not doubling up.

When you’re at the store, avoid making impulse purchases and don’t buy in bulk, since a lot of bulk purchases just end up in the trash. In a nutshell, be realistic and don’t buy more than your household can eat.

In addition to watching what you buy, take mental note of what you actually end up eating. Curb food waste (and spending) over time by paying attention to what you’re throwing away and look for patterns. If you repeatedly catch yourself tossing mushy grapes, maybe you don't like them as much as you think you do. Or you might want to try buying smaller quantities — or finding alternatives with longer shelf lives. Putting a price tag on food waste might help put things into perspective.

4. Don’t be afraid to use your freezer.

Frozen produce often gets a bad rap, but it shouldn’t. Not only is it less expensive, it’s often comparable in taste and nutrition to its fresh counterparts. That said, freezing can sometimes change the texture of fruits and veggies. That’s because the process of freezing ruptures the plant cells that help support texture. But you probably won’t even notice these texture changes if you add frozen produce to a cooked dish or a smoothie. Some people prefer to buy the frozen versions outright, since it’s more convenient and won’t spoil.

And it might seem weird at first, but you can freeze a surprisingly wide range of foods. Cheese, leftover marinara sauce, sliced bread, cooked rice and more can all be stashed in the freezer for later use.

5. Give limp or wilting fruits and veggies a new purpose.

We’ve all been there: You planned to eat a salad every day this week, but that didn’t happen. Now, you’ve got wilted spinach, pruned tomatoes and limp carrots on your hands. But you should think twice before automatically throwing them away. Produce that’s past peak freshness will work well in most cooked dishes — from soups and stir fries to pilafs and more.

Placing a dry paper towel in the storage containers of leafy greens or around a bunch of cilantro will noticeably extend the shelf life of these foods. The paper towel absorbs excess moisture, which is what causes them to go soggy. When the towel gets damp after a few days, you can replace it with a new one and make these foods last even longer.

Some produce emit a natural gas called ethylene that causes nearby fruits and veggies to ripen (and spoil) faster. Apples, bananas, avocados, tomatoes and peppers are some of the top ethylene producers. Combat this by keeping the worst offenders away from fruits and veggies that are particularly sensitive to the effects of ethylene. Many of the highest producers of ethylene are also sensitive to the gas. Additionally, cantaloupe, kiwis, cucumbers, grapes, lemons and mangoes are prone to ethylene's effects.

As a rule of thumb, most ripe fruits and veggies will keep longer if they’re stored in the crisper drawer of the fridge. The exceptions are onions, garlic, potatoes and squash, which like cool, dry and dark places. Tomatoes generally taste better if they aren't put in the refrigerator.

But maybe food safety, not lack of variety, is what's holding you back from enjoying leftovers. In that case, you should know that properly refrigerated leftovers usually do keep longer than a few days.