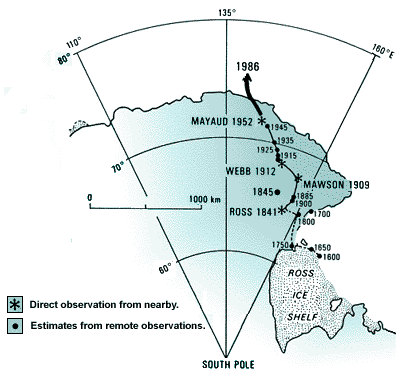 A hundred years after Robert Scott

's disastrous mission to the South Pole, a pair of Kiwi scientists are traveling to his observation hut

today to continue the work he began there: tracking the Earth's magnetic field. Since 1957, New Zealand has measured the field at Scott's base every five years, accruing data that, along with measurements from other, more comfortable sites around the world, helps maintain the model used by NATO and nations' defense departments for navigation. The planet's magnetic field needs tracking because it is shifting: the magnetic south pole

has been traveling northwestward at a rate of 6 to 9 miles a year for the past century. (The geographic South Pole is somewhere altogether different

.) This shift occurs because the mass of molten metal that makes up the Earth's outer core

is in a constant state of turmoil, and the the poles could veer off in another direction at any time. Intriguing, the magnetic field has also been getting weaker since the 1800s. But whether that means the poles will flip at some point in the future---it's happened before!

---or whether it will start getting stronger again very soon is a mystery. [via Nature News