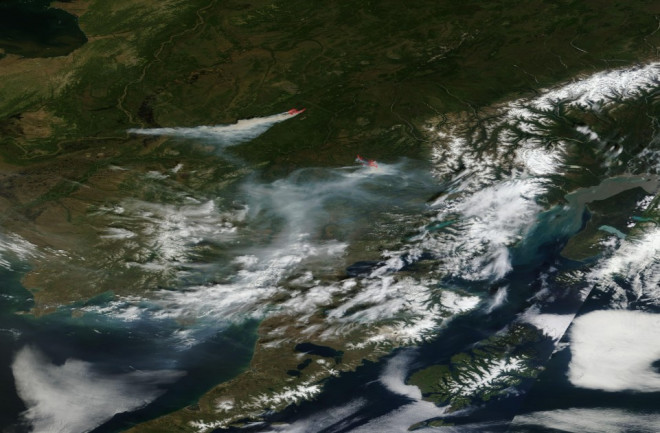 Wildfire smoke plumes are visible in this image captured by NASA's Terra satellite on Tuesday, May 18. Click on the image for a larger version and look for the small red rectangles indicating the thermal signature of fire. (Image: NASA) Update: See the end of the post for clarifications and new information from the communications coordinator for the Alaska Department of Natural Resources. With record-breaking temperatures across Alaska showing no signs of abating, wildfires like the ones seen in the image above from NASA's Terra satellite may well be a common sight coming weeks. Here’s a snippet from the National Weather Service forecast discussion for the Fairbanks area:

…REGARDLESS OF WHICH MODEL IS FOLLOWED...ALL OF THEM SPELL EXTREME HEAT FOR NORTHERN ALASKA ALL THE WAY THROUGH THE MID RANGE MODELS. THERE IS SOME DEVIATION IN TERMS OF HOW HOT...BUT RECORD BREAKING HEAT IS LIKELY THROUGH AT LEAST THE END OF THE MONTH ACCORDING TO ALL OF THE MODEL RUNS.

For Fairbanks and other areas in northern Alaska, that means temperatures in the high-80s and even low-90s, compared to normal maximum temperatures in the high 60s and low 70s. Alaska's heat wave isn't simply a one-off, freak event. Since the mid-20th Century, the average temperature of the Earth has increased by about 0.6°C (1.1°F), driven in large measure by our emissions of heat-trapping carbon dioxide and other greenhouse gases. But the warming hasn't been uniform. In fact, the far north has been warming faster than anywhere else, with the Arctic heating up twice as fast as the global average. This map shows how temperatures around the globe varied from the long-term mean between 2000 and 2009:

Global temperature anomalies for 2000 to 2009. (Image: NASA Earth Observatory) Click on the map for a larger view and have a look at the far north, including Alaska. The reddest portions indicate temperatures that are 2 degrees C warmer than the norm for a particular region between 1951 and 1980. The map makes clear that while temperatures have increased across almost all of the globe, the warming has been even more pronounced in the far north — including Alaska. The phenomenon is called "Arctic amplification," and several mechanisms have been proposed. One of the most important involves the floating lid of sea ice that covers much of the Arctic Ocean. As warming has occurred, Arctic sea ice has shrunk, allowing solar energy that would otherwise have been reflected into space to warm the ocean. And with less ice covering the ocean, more of its heat has been escaping into the atmosphere. I'll be keeping an eye on developments in Alaska and other parts of the far north this summer. So stay tuned. In the meantime, if you live in Alaska or another region in the far north and have pictures of wildfire or other manifestations of extreme warming, leave a comment below and indicate how I can get in touch with you. Update: Elizabeth Bluemink, communications coordinator for the Alaska Department of Natural Resources (and a former participant in a fellowship program that I run here at the University of Colorado) got in touch through Facebook to clarify the situation in Alaska, which she suggests I mischaracterized in a Tweet about what's happening there:

Headsmack re your Twitter post! Fire season has barely gotten started in Alaska! A few fires but nothing like what we had a few years back. There's extremely high fire risk right now but fire managers consider this a relatively slow season so far. Further note: The 2012 fire season was extremely slow in AK, with the biggest news being all the crews being sent to the Lower 48The coolest thing is the real time lightning strike map. I would watch it on Thursday. Could be exciting.Friday could be more exciting.