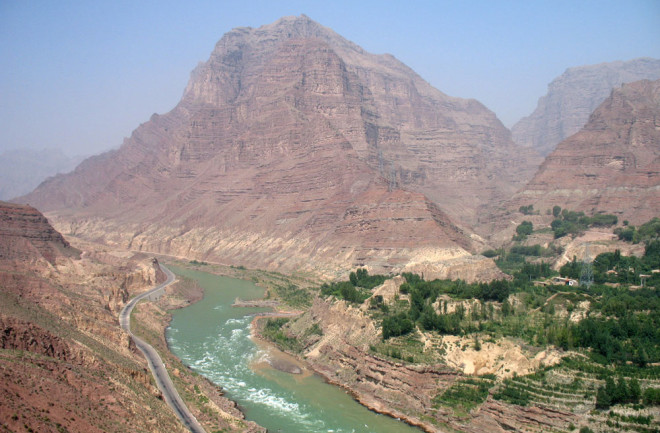 In central China's Jishi Gorge, gray sediment layers -- now well above the Yellow River -- indicate an ancient lake created in a landslide and then released by a devastating earthquake. | Qinglong Wu

According to ancient Chinese texts that mix historical events with legend, about 4,000 years ago a hero named Yu tamed a flood and went on to become China’s first emperor. The story may be largely myth, but geologic evidence reported in Science this August suggests that at least the Great Flood was real — and really Great.

“It’s sort of the equivalent of if we found evidence of Noah’s flood from the Bible,” says Taiwan University archaeologist David Cohen, co-author of the study.

About 800 miles west of Beijing, along a 30-mile stretch of the Yellow River, researchers found a variety of sediments, indicating a landslide, a lake and a violent flood in the distant past. Based on the extent of these deposits, they were able to reconstruct the catastrophic events: A landslide dammed the river, forming a lake several hundred feet deep. After several months the dam burst, releasing a torrent of nearly 100 million gallons of water per second.

Flood sediment settled over collapsed buildings and crushed bodies some 15 miles downstream at the archaeological site of Lajia. But the waters didn’t flatten the village or kill its residents — an earthquake caused the death and destruction, and probably also triggered the dam collapse that led to the flood.