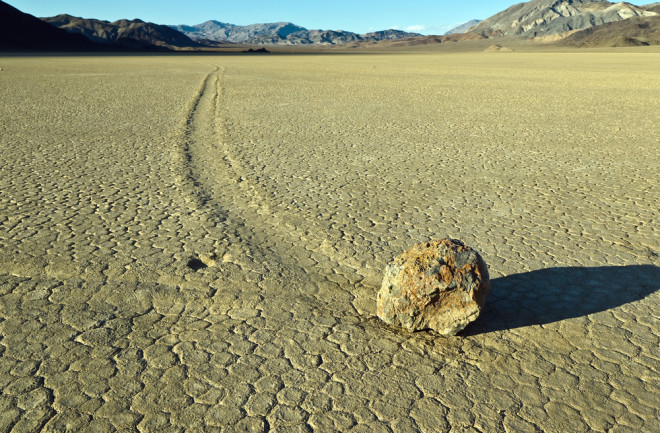 The Racetrack Playa — a barren lakebed in Death Valley National Park — is home to one of the world’s natural wonders: “sailing stones” that mysteriously meander across the dried mud, leaving tracks in their wake. Since the 1940s, these rocks have fueled wonder and speculation because no one had seen them in action — until now.

A team of U.S. scientists recorded the first observation of these boulders in motion, using GPS monitors and time-lapse photography. By meticulously tracking weather data, scientists also explained how these rocks slog across the playa. What was one of the world’s natural wonders now appears to be the perfect combination of rain, wind, ice and sun.

Years ago, researchers traveled to the Racetrack Playa with plenty of instruments in tow. They first installed a weather station and several time-lapse cameras around the playa. They also placed 15 GPS-embedded limestone rocks of various sizes throughout the playa. Then, it was time to wait.

“As one of the other researchers on this project said, ‘Probably the most boring experiment ever,’” study co-author Jim Norris said in a video about the experiment.

However, things got interesting in November 2013. In late November, significant amounts of rain and snow created a small pond in the south end of the playa. When December came, the GPS-embedded rocks started moving, with the heaviest weighing in at 35 pounds. The rocks reached blazing speeds of 9-16 feet per minute. Most importantly, the race was caught on camera.

So what caused the rocks to drag themselves across the playa?

Getting the Green Light

Past theories attributed the rocks’ movements to high winds, liquid water, or ice. But scientists discovered it’s a careful balance of all these factors.

When the small pond formed in the southern portion of the playa, it cyclically froze at night and thawed under the midday sun. When the sun warmed the pond, thin layers of surface ice started breaking apart into massive floating sheets tens of meters in size. Although the ice sheets were large, they were still just a few millimeters thick.

But the freezing and thawing wasn’t enough on its own. A steady, light wind of about 7-10 miles per hour was also needed, but before the ice had completely melted. This wind, timed with the midday melt, pushed massive panes of ice into the stones. When the ice accumulated behind the stones, it generated enough force to set the stones into motion. And rather than floating or rolling, the rocks bulldozed their way across the mud, leaving behind their signature tracks. Researchers published their findings Tuesday in the journal PLoS ONE.

The rocks won’t move if there’s too much water or ice, too much sun, or not enough wind. Everything must act in perfect harmony for the races to ensue. So, in addition to their “sailing stones” moniker, we suggest a new name for these fascinating boulders: the Goldilocks Rocks.