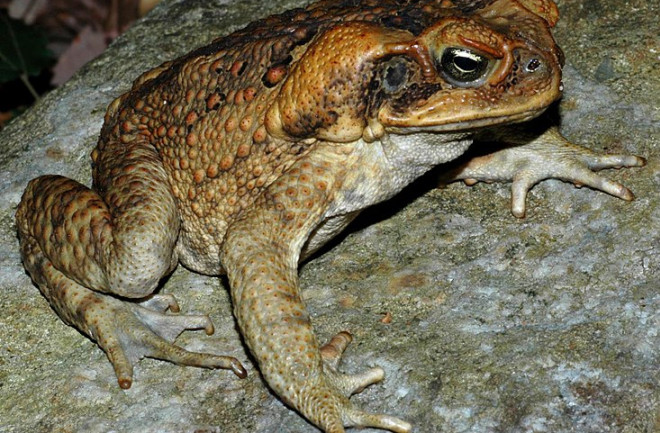 Researchers in Australia think they have found a solution to the country’s toxic cane toad problem: make Australian meat ants eat them. Cane toads — which can grow up to 8 inches (20 centimeters) in length — were imported from South America to Queensland [in northeast Australia] in 1935 in a failed attempt to control beetles on sugarcane plantations. Trouble was, the toads couldn’t jump high enough to eat the beetles, which live on top of cane stalks [AP]. Since their introduction, cane toads have spread through most of tropical Australia, eating and poisoning native animals [New Scientist]. No one has been able to get their population growth under control, and past suggestions to do so by introducing exotic diseases have only raised concerns about causing as much harm as the toads have themselves.

But a research team led by ecologist Rick Shine found that cane toads are more vulnerable to being eaten by Australia’s predatory meat ants than are native frogs, which may allow the ants to be used as a “safe” biocontrol agent that would not interfere with native frog species. Shine said the team plans to try ways of encouraging meat ants to build colonies near toad breeding ponds. One way would be to plant trees the ants favor [The Australian]. He is hopeful the strategy will work because unlike native frogs, cane toads are active during the day, when meat ants roam about scavenging for food. Toads also tend to breed in ponds that are out in the open sun, which results in their young emerging onto bare, baked mud areas, a habitat where meat ants like to forage [Sydney Morning Herald]. The toad is also more vulnerable because it lays its eggs in the dry season when water is low and there’s little protective vegetation at the pond’s edge [The Australian].

Until its adult life, when it grows to be quite large, the toad is smaller than native amphibians, and sticks around longer when the ants attack — it takes about five seconds to move away, compared with the natives’ one second average: it doesn’t have the leg-power to leap quickly away from attacking ants. Worse, it doesn’t watch for the ant as do local species. The final kiss of death for baby Bufo [cane toads] is that its potent toxin doesn’t faze ants. The compound attacks the heart of vertebrate predators and ants, of course, are heartless [The Australian]. Meanwhile, meat ants are fierce fighters with powerful bites, and a band of the insects can easily take down a small toad.

The study, published in Functional Ecology, coincidentally follows the weekend’s “Toad Day Out” event, a mass capture and killing of the cane toads, with many of the creatures’ corpses being turned into fertilizer for the very farmers they’ve plagued for years [AP]. But according to Shine, the Queensland event will likely reduce numbers, but only in the short term. “There’s been a tremendous community effort,” he says, but “with females laying up to 30,000 eggs in a single clutch, it’s not a long-term strategy” [New Scientist].

The meat ant proposal is not quite shovel-ready, of course. Ecologist Ross Alford said that while the proposal is interesting, people should “try it cautiously. Ants are generalist predators, so if you increased their numbers, you may see an effect on native animals apart from frogs” [New Scientist].

More From Discover
Environment
Investors Are Betting on Seafood Alternatives
Environment
This Common 'Super Plant’ Could Inspire Drought-Resistant Crops
The Sciences
How the Ancient Maya Practiced Sustainable Agriculture
Planet Earth
Research Suggests Gophers Are One of the First Mammalian Farmers
Health
Microgreens Pack a Macro Nutritional Punch
Planet Earth
What Was Stonehenge Like Before It Was Built?
Recommendations From Our Store
My Science ShopDiscover STEM Kits
My Science ShopDiscover 2022 Calendar
My Science ShopStrange Science
My Science ShopElements Flashcards
Shop Now
Stay Curious
Join
Our List