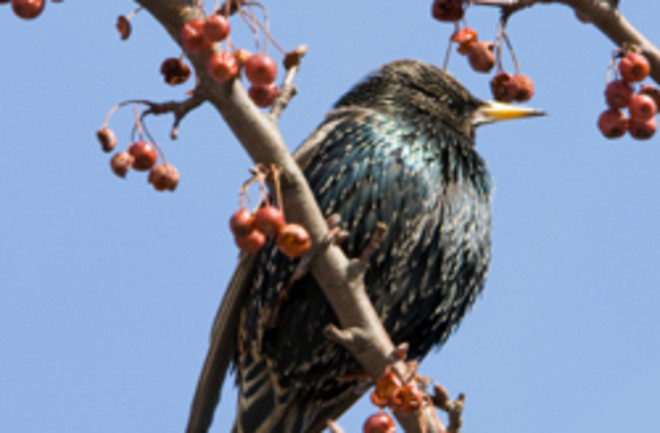 It is hard to avoid the female sex hormone estrogen and all the chemicals that mimic it: Not only do they show up in cosmetics and cleaning products, but they are also commonly used to make plastic bottles and line food cans. Some experts have traced estrogen-like chemicals to increased rates of human breast cancer, and there is even more evidence that they endanger animals by feminizing the sex organs of male frogs and fish living downstream from sewage treatment plants. Then there is one species of bird—the starling—in which environmental estrogens have an especially surprising effect: Exposed male starlings turn into better singers, duping female starlings into choosing mates that may be bad bets.

The discovery comes from Cardiff University in Wales, where researchers compared starlings raised in aviaries and fed a controlled diet with those living at sewage treatment plants and feasting on earthworms inhabiting the rocky filter beds. Since the worms survive on microbes that degrade the sewage, the treatment-plant starlings consumed natural human estrogen along with three estrogen mimics: DEHP, used to manufacture polyvinyl chloride; DBP, found in nail polish; and bisphenol A, common in hard plastic bottles.

At first, both groups of starlings appeared to behave normally, exhibiting a natural seasonal cycle in which “the whole [brain] mechanism for song shuts down in autumn, presumably to make room for other centers that are more important—like finding food,” says Katherine Buchanan, a study leader. When the spring mating season rolled around, estrogen in the male brain surged in both groups, triggering an expansion of the vocal center and a burst of song. But for birds consuming the estrogen cocktail, the vocal center grew even larger—and they sang five times as long as uncontaminated birds and composed more complex songs. In the lab, female starlings showed a preference for those songs, perching near a loudspeaker that was playing them.

Blood tests, however, showed that the doped male starlings had compromised immune systems, suggesting that they were less fit. The starling population in Britain has dropped by half in the last four decades, Buchanan says, mostly because humans have been encroaching on their habitat—but perhaps also because pollutants are creating a siren song that has bewitched the females, luring them to reproduce with more musical, but less healthy, mates.