Feeding Seaweed to Cows Could Curb Their Methane-Laden Burps 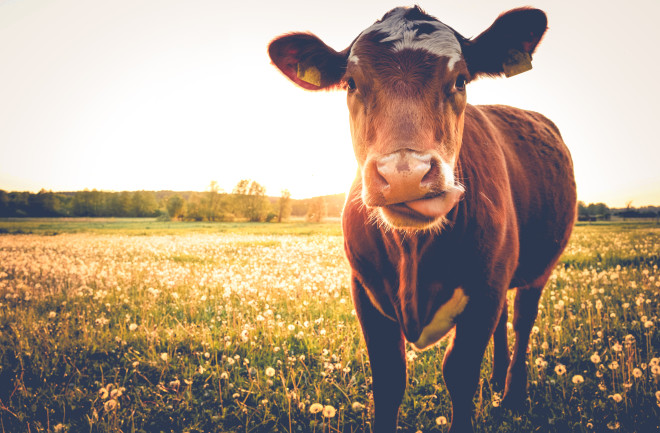 Every morning, Breanna Roque goes out to the barn to feed the cows. But this isn’t your typical farm; it’s a laboratory, and Roque is a graduate researcher at the University of California, Davis. She’s been spending her time among the bovines to see if she can tweak their diets so they burp less.

The cows’ special diet includes small portions of a red seaweed called Asparagopsis armata. It contains a compound called bromoform, which inhibits the action of an enzyme that produces methane during the cows’ digestion. Less methane means less burping. And, on a global scale, less burping could mean slowing down climate change.

Look to the Cows

The EPA estimates that methane from livestock, especially cows and other ruminants (cud-chewers) like sheep, makes up almost one-third of agricultural emissions in the U.S. And although agriculture accounts for a smaller percentage of total greenhouse gas production than sectors like transportation and energy, it produces more methane, which warms the Earth up to 86 times as much as CO2.

When cows eat, they burp food back up, chew it as cud and swallow it again to make it easier to digest. But during that process, which cows repeat dozens of times throughout the day, an enzyme made by microorganisms in their gut produces methane as a byproduct.

Researchers across the globe have been pursuing the idea that adding substances to feed might help reduce these methane-laden burps. But it wasn’t until 2016 that researchers in Australia finally homed in on a strand called Asparagopsis taxiformis. In lab models, they found that grass feed that was 2 percent seaweed could cut methane emissions by nearly 99 percent. In 2019, Roque’s team published the results of a similar study: They cut methane production 95 percent by supplementing a typical U.S. dairy cow diet with just 5 percent A. taxiformis. But questions remained about the seaweed’s effectiveness in actual cow stomachs.

So the researchers headed to the farm. When they tested a similar species, A. armata, at low levels in the diets of lactating dairy cows, they found that a diet of just 0.5 percent seaweed led to a 26-percent decrease in methane. A 1-percent seaweed diet produced 67 percent less methane.

The team is now wrapping up a feeding trial that tested A. taxiformis in beef steer to see if results would be comparable to the dairy cows. Further research is needed to fully understand why this seaweed in particular works best — and to see if adding seaweed to cows’ diets will affect the quality of the products coming from the animals. In the future, they’ll run trials to see if seaweed gives cow’s milk a funky flavor, or leaves steaks redolent of seafood.

Hold on to Your Heifers

Researchers still need to ensure the burp-curbing compounds, which are sensitive to heat and light, will be shelf-stable and remain effective in real-world applications. And even if the seaweed succeeds, methane from livestock account for just 5 percent of greenhouse gas production in the U.S., so the overall picture won’t improve much.

Still, last August, researchers at the University of the Sunshine Coast in Queensland, Australia, announced they would be trying to find ways to farm A. taxiformis on a large-enough scale to break into the livestock feed market.

The Australian endeavor will be a key step toward seeing bromoform in action. Roque says she’s regularly contacted by folks from the ag industry who want her help to mass produce the seaweed for global animal consumption. “People reach out to me all the time,” she says. “Unfortunately, I’m an animal biologist and not a marine biologist.”