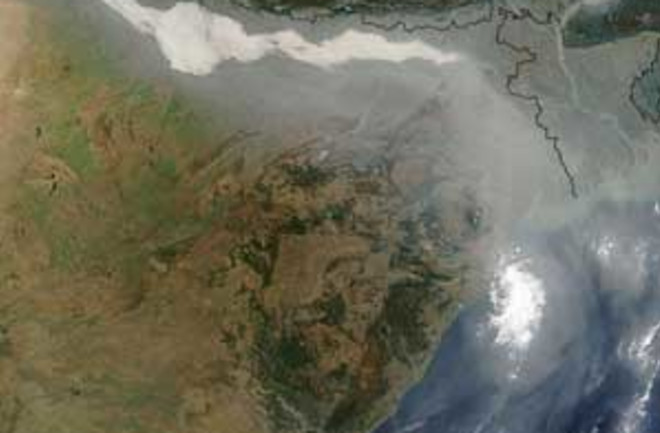 This image from the Terra/MODIS satellite shows thick haze and smoke in northern India; much of it comes from burning biomass. | Image courtesy of William K-M Lau/NASA

Particulate air pollution is typically measured at ground level. Unfortunately, many of the world’s most polluted areas are in developing countries that cannot afford extensive monitoring. To remedy this, Sundar Christopher, an atmospheric scientist at the University of Alabama at Huntsville, compared satellite data with ground measurements in well-studied areas. Using those comparisons, he devised a way to determine surface air quality using satellite data alone. “Remote sensing is the only viable way to monitor global particulate matter,” he says. Using NASA’s Terra and Aqua satellites, he and his team examined 20 cities with populations greater than 10 million. In 15 of them, pollution levels were five to ten times higher than the World Health Organization’s guidelines. The researchers are now using satellites to track how pollution moves from one region to another.

Meanwhile, on the ground, other scientists have found new ways to track refinery pollution. Environmental engineer Shankar Chellam of the University of Houston placed filters around his city to collect metals released by oil refineries. The highest pollutant concentrations occurred on days when refineries reported equipment problems, suggesting they are the source. Chellam will analyze pollution contributions from other industries and from vehicles to provide policymakers with data needed to create more effective regulations.