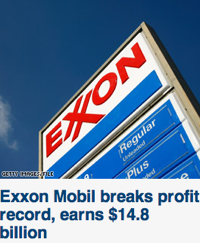 Despite the economy, it appears some businesses continue booming. In July, we reported that Exxon Mobil posted a net income of $11.68 billion. Well, record broken. According to CNN, its third-quarter profit was $14.83 billion:

So new quarter, same question: How about reinvesting some of the profits tax toward alternative energy research?