https://twitter.com/eddiehosa/status/354395099372847104 The Tweet above is one of many featuring extraordinary images from the massive flooding that occurred in Toronto yesterday. It shows passengers on one of the city's Go Transit trains. The flooding, which paralyzed much of the city and contributed to power outages affecting 300,000 people, was the result of so-called "training thunderstorms" — a phenomenon that occurs when new thunderstorm cells form in the wake of previous ones that have moved on. Make sure to keep reading for a satellite image of thunderstorms blossoming just north of Toronto, as well as a summary of some of the recent research on links between extreme precipitation and climate change. But first, more information about the storm and resulting flooding.  At Toronto's Pearson International Airport, the training thunderstorm phenomenon produced a torrent of 4.96 inches yesterday (July 8), breaking the record for rainest day ever recorded at that location, according to meteorologist Jeff Masters. It was equivalent to the amount of rain the city would ordinarily get in the entire month of July. For downtown Toronto, it was the second rainiest day on record, according to Rob Davis of The Weather Network: https://twitter.com/RobDavis_Wx/status/354577423569928192 I've been looking for remote sensing images that show the extent of the flooding that occurred as a result of the storms. This morning NASA let me know that the new ISERV system on the International Space Station unfortunately has not captured any images. I thought of asking because in June, ISERV produced some extraordinary pictures of flooding in Calgary, caused by torrential rains from a slow-moving storm adding to a very wet spring. So far, I have found one image showing thunderstorms near Toronto yesterday afternoon: 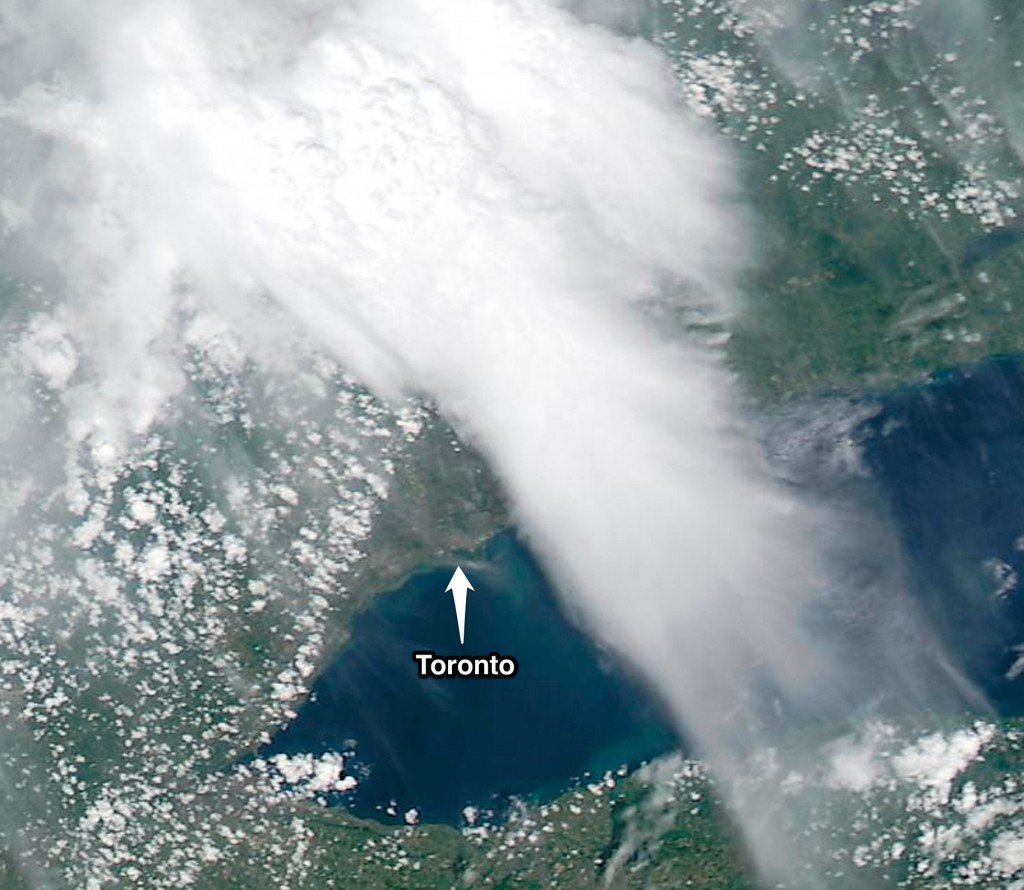 Large thunderstorm clouds are visible just north of Toronto in this image captured by NASA's Aqua satellite on July 8. (Image: MODIS Today/Cooperative Institute for Meteorological Satellite Studies. Click here for a regional view.) The storms hit Toronto at about 4 p.m. local time yesterday. But I'm not sure whether this Aqua image was captured before or after. I'll try to find out. I'm also continuing to try to track down additional remote sensing images of the event. Coincidentally, just as the storms were boiling up I was only 50 miles south of Toronto (as the crow flies) on a hike in the spectacular Niagara River Gorge. Here's a 180-degree panorama (click on it to open it larger):

A 180-degree panorama shot from the shore of the Niagara River Gorge on July 8. The river flows north to south, or from left to right in the image. (Photograph: © Tom Yulsman It was a somewhat humid day, and there were some puffy clouds in the sky. But as you can see from the picture, there was no sign that a catastrophe was in the making just to the north. There is, of course, a broader context to what happened in Toronto: Extreme rainfall events have been on the increase in many parts of the world, and with climate change we should expect the trend to continue. For example, a draft federal report published earlier this year found that heavy downpours have been increasing in most regions of the United States:

. . . very heavy precipitation has increased over the past century in many parts of the country. The largest increases have occurred in the Northeast, Midwest, and Great Plains, where heavy downpours have exceeded the capacity of infrastructure such as storm drains, and have led to flooding events and accelerated erosion.

And recent research suggests that as the atmosphere continues to warm from climate change, enabling it to hold more more moisture, many areas could experience even more extreme precipitation events. For example, a study published in April found that if greenhouse gas emissions continue at a high rate, the maximum precipitation possible over large portions of the Northern Hemisphere could increase 20 to 30 percent. With more warming and heavier precipitation, we should also expect more flooding in many parts of the world. Research published in June showed that both the frequency of flooding and the number of people at risk are likely to rise over the next century if greenhouse gas emissions continue unabated. (Andrew Freedman at Climate Central did a nice job describing that research here in a story about the Calgary floods.) Make sure to check back here for additional information, imagery and context about the flooding in Toronto.