Everything Worth Knowing About ... Sea Level Rise

How many cities will our oceans swallow? 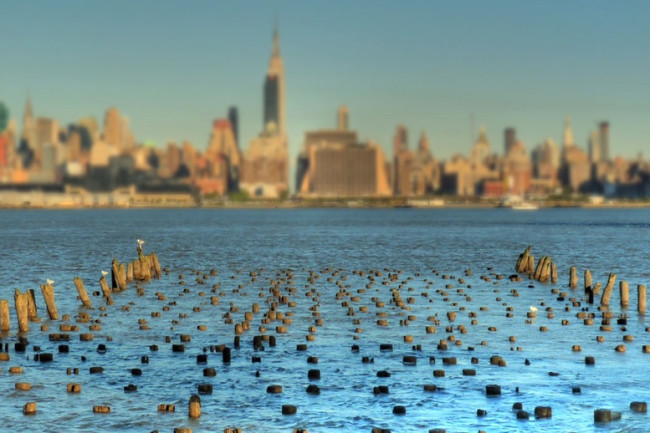 Imagine the Statue of Liberty, water lapping at her skirts. Or the Sydney Opera House, seawater filling its seats.

Coastal areas around the globe are losing ground to the sea — and faster than ever. In the past quarter-century alone, the ocean has risen an average of almost 3 inches.

With nearly half the world’s population living within 93 miles of a coast, and much of the globe’s commerce concentrated there, sea level rise looms as one of the greatest of all climate change threats.

Given the vastness of the oceans, it may be hard to imagine that warming seas and melting glaciers could raise sea levels enough to inundate thousands of miles of coastline. But adding an inch of water to a full bathtub can still soak the floor — it won’t take much to flood the world’s cities and ecosystems.

Unlike other climate issues, the science of sea level rise is fairly simple. Ocean levels are increasing mostly because of what heat does to water, in all its various states. As global temperature rises, most of the extra heat in the atmosphere — about 90 percent — sinks into the ocean. As the water warms, it expands, “just like mercury in a thermometer,” explains R. Steven Nerem, a professor of aerospace engineering sciences at the University of Colorado Boulder. This thermal expansion accounts for one-third of sea level rise. The other two-thirds comes from melting mountain glaciers and ice sheets in Greenland and Antarctica. 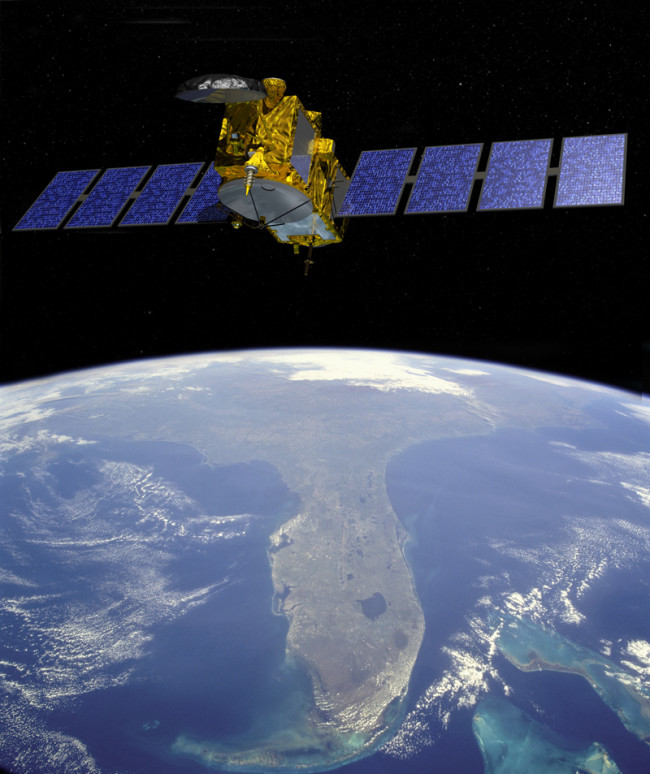 This photo illustration shows the southern Florida coastline and the Jason-3 satellite, which launched in January. It will monitor 95 percent of Earth’s ice-free oceans every 10 days. NASA/JPL-Caltech

Scientists know all this because of data collected from satellites that detect changes in the ocean’s height. Using a satellite called Jason-3 (part of the Joint Altimetry Satellite Oceanography Network), scientists track changes in sea levels across the planet. Equipped with altimeters, “[it] bounces a radar signal off the surface of the ocean, then times how long it takes to come back,” explains Josh Willis, an oceanographer at NASA’s Jet Propulsion Laboratory. While satellites have provided consistently good data for years, the next frontier in sea level rise measurement is a new type of radar that can capture a more crisp, higher-resolution picture of sea surface heights.

Data from Jason-3 and its predecessors, as well as tide gauges, show that since 1992, global average sea levels have increased about twice as fast as they did over the past century. What’s not yet clear is just how quickly sea levels will swell in the future.

Scientists have a pretty good idea of how thermal expansion and melting mountain glaciers will play out over the long term, but when it comes to the ice sheets, “we have no idea,” Willis says.

So far, the news is not good. Studies by glaciologist Eric Rignot of the University of California, Irvine and others suggest that ice sheets could melt faster than scientists initially thought. And there’s new evidence that ice shelves in Antarctica are melting from the bottom as well as the top, eaten away by warm currents circulating beneath. 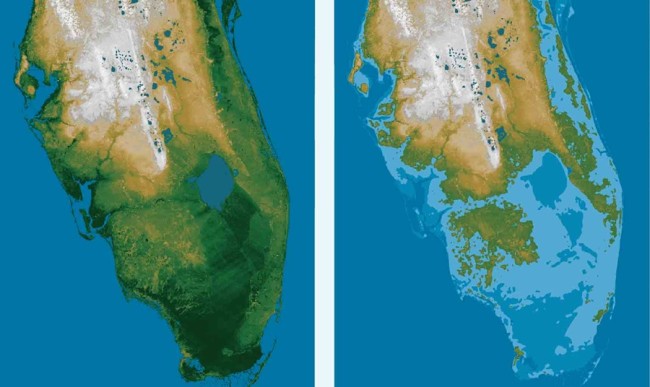 Meanwhile, at Earth’s opposite end, Greenland’s massive Jakobshavn glacier — the fastest-moving glacier in the world — last August lost a chunk of ice that could cover Manhattan in a layer 300 meters thick.

Willis and his team have launched a project he’s dubbed Oceans Melting Greenland, or OMG (“I did that on purpose,” he admits), to establish how much the warming ocean is eroding the ice from below. The plan is to drop sensors into the surrounding ocean to measure water temperatures, then skim the ice for signs of changes in surface height. The team also wants to figure out the effect of water welling up from deep canyons in the ocean floor.

“There’s a small, growing community that’s looking at this interaction between the ocean and the ice,” both in Greenland and in Antarctica, Willis says. “It’s definitely a major new area of study because we think it’s so key to this question of how much sea level rise we’re going to get in the next hundred years, or 500 years.”

It takes a long time for the ocean to respond to increasing heat, so even if greenhouse gas emissions dropped to zero tomorrow, the world’s seas would continue to rise for centuries because of the warming that’s already happened. But we can still tamp down climate change projections — and limit sea level rise over the long term — if meaningful emissions cuts are implemented now, climate scientists say. That will depend in large part on the success of the international climate agreement adopted in Paris in December, which calls for keeping warming to 1.5 to 2 degrees Celsius above pre-industrial levels — through an array of individual fossil fuel reduction targets.

Who’s Most at Risk?

Sea level rise is not an equal-opportunity catastrophe. Some coastal areas will be hit harder than others.

That’s partly because the warming of the oceans is not uniform, says R. Steven Nerem, a professor in aerospace engineering sciences at the University of Colorado Boulder. “The ocean takes up heat differently in different locations,” he says. The warmer the water, the higher it goes.

Low-lying countries in the tropics, such as Bangladesh, are among the most at risk from sea level rise. Bangladeshis have watched high tides rise 10 times faster than the global average, and sea levels there could increase as much as 13 feet by 2100.

But in areas of the U.S. West Coast, water levels actually decreased in the past two decades. That dip appears to have been the result of a natural cooling cycle called the Pacific Decadal Oscillation, which has now given way to a warmer phase that’s expected to reverse the trend.

Sea level rise along any given stretch of coast depends on how far away it is from the globe’s two big ice buckets: Greenland and Antarctica. While it’s easy to think the closest countries will see the biggest rise as the ice melts, it’s not so simple.

Greenland and Antarctica’s massive ice sheets exert a strong gravitational pull on the waters around them, but as they melt, the attraction weakens, causing nearby sea levels to fall. In addition, without the burden of weight from the ice, the land uplifts, rising slightly more above the water. The effect diminishes with distance, so it’s actually the places farther away from the melting ice that will see the biggest rise in sea level. Ocean currents help push the meltwater around the globe.

Take Holland: It will be much more heavily influenced by Antarctic ice melt than by falling sea levels around Greenland, says Jerry Mitrovica, a geophysicist and sea level modeler at Harvard University. “It’s really an amazing and somewhat counterintuitive result, but that’s the reality.” 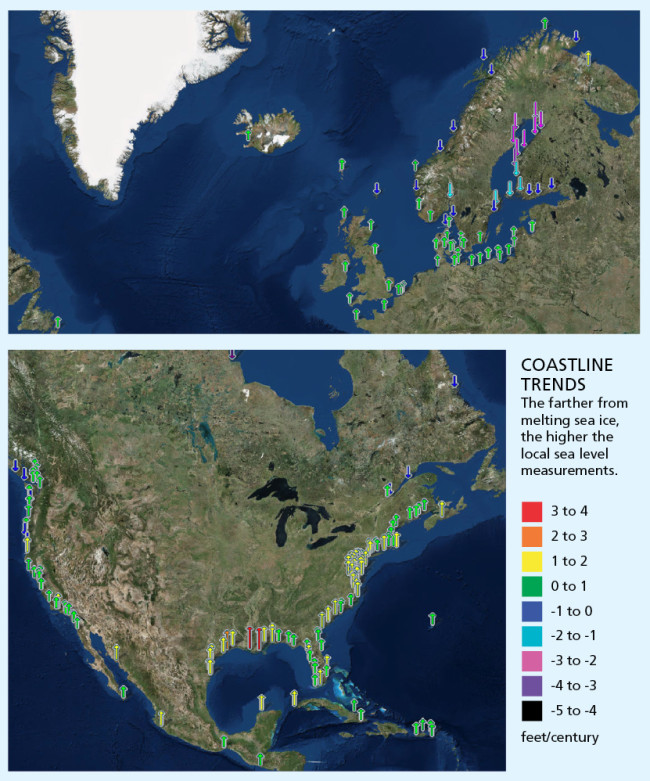 For most of the past 2,000 years, sea levels varied only slightly, dipping during cool periods and lifting during warmer ones. But since the Industrial Revolution, they’ve crept ever upward. Global sea levels have risen an average of about 8 inches since 1880, when record-keeping began, and are expected to swell another 1 to 4 feet by the end of this century. 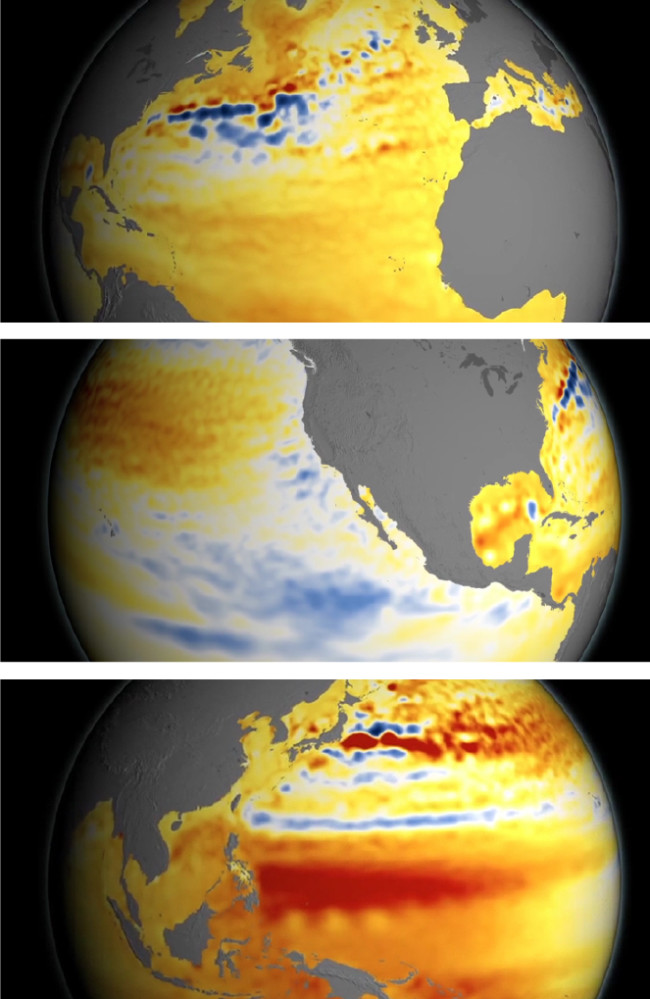 These three illustrations, based on data from 1993 to 2014, show changes in sea level rise. Most of the world’s seas are yellow and orange, indicating a pattern of rising levels. Blue reflects areas where levels dropped. The middle globe shows a drop in levels west of Mexico, due to a cyclical climate variation called the Pacific Decadal Oscillation. The bottom globe shows a rapid rise in the western Pacific. TOPEX/Poseidon, Jason-1, Jason-2

Turning Back the Tide

Coastal cities are woefully underprepared for the rising tides. In most places, houses, roads, subway systems and other infrastructure were built long before sea level rise was on our radar. But a few cities are taking steps to fortify themselves against the encroaching sea.

Boston: To cope with the expected 2- to 4-foot rise in sea level expected along the Massachusetts coast, the city adopted a policy in 2013 that requires developers to submit sea level preparedness plans when seeking approval for new projects. Some developers are already building with flooding in mind: The new Spaulding Rehabilitation Hospital was constructed with a raised first floor, and its electrical systems are housed on the roof.

New York: Officials are considering a $6.5 billion harbor wall to keep the water out. Gov. Andrew Cuomo has proposed buying out residents in vulnerable areas and replacing their homes with wetlands and dunes to move people out of harm’s way and buffer the city against storm surges.

San Francisco: Officials have proposed a wetlands restoration project that will take several decades and several million — potentially billion — dollars to implement. It would help protect the city and surrounding areas.

Rotterdam: The low-lying Netherlands has battled the encroaching sea for centuries. The country uses an array of dikes, sluices and locks to contain the water just beyond land’s end, but officials have realized that walls are not enough; in some places, they can cause erosion and begin to sink, defeating their purpose. Now, officials in some cities are taking a new tack, widening rivers, replenishing natural sand barriers and creating parks designed to flood when waters rise.

[This article originally appeared in print as "Sea Level Rise."]